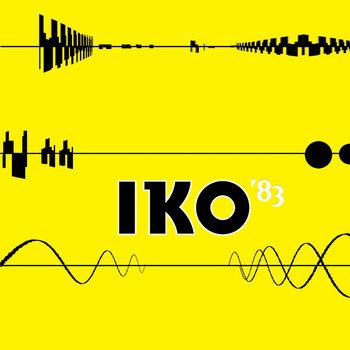 After being bootlegged several times in the past years, first on CDR and then on LP, the first and only album of Canadian's band Iko is about to be reissued officially by Medical Records. "83" has been released officially by the label Manhattan - Formula back in 1982 and had eight electronic tracks in balance from post punk and pop. Songs like "Communication Off" or "Jungle City" (available on this reissue for the first time) contained elements of post punk roughness (check the vocals and the noise effects) as well as a robotic approach to sounds and rhythms. Other tunes like the French sung "Gonadotropic Synthesis" or "Elevator" show synthpop influences of bands of the likes of Telex thanks to that particular melodic catchy tunes mixed to dry synth sounds and upbeat tempos. This reissue contains the aforementioned unreleased track"Jungle City" on the vinyl version and the digital version, which can be purchased separately, has four bonus tracks (these tracks can be downloaded using the coupon available in the LP): "Military Service", "Surrender To The Dream", "Army Service" (song that isn't available on the bootlegs) and a live instrumental version of "Surrender To The Dream" (which sounds more experimental compared to the studio version). "Surrender To The Dream" offer a view of how would have turned Iko's sound, because they sound a bit more wave with lushy atmospheres with slapped bass lines and few guitar inserts. Mastered and equalised from the original master analog tapes, "83" is available on high-quality 180gram heavyweight half and half yellow and black vinyl and has also a bonus insert with interview and retrospective by Dave Segal. This reissue will be available on late September 2014.