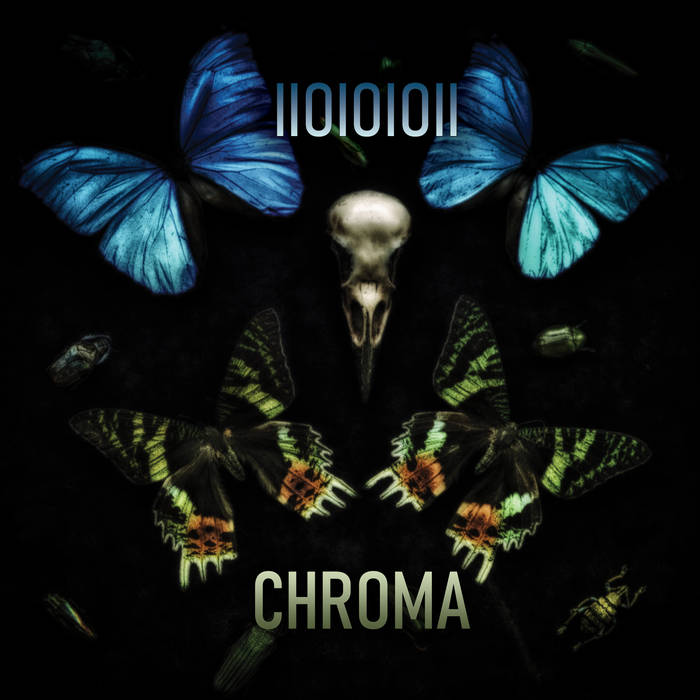 Formed in 2012 in Charlotte, North Carolina, IIOIOIOII (simply pronounced I.O.) is the solo project of the Electronic musician Chris Gurney. After the self-released debut "Reflect" in late 2012 he could enter a deal with the British Juggernaut label to release his highly acclaimed follow-up album "Sun", which can be surely named as a highlight of this far too early disbanded label. After getting signed in 2016 with the Manchester-based Analogue Trash label and the release of the third album "Post Brimstone (Expanded Edition)", Chris nowaddays returns to provide his fourth album "Chroma + Chromatic" and this is undoubtly his most matured and coherent sounding album so far.

This all new album can be seen as classic double-CD release. "Chroma" presents the listener 10 completely new compositions, while "Chromatic" acts globally like the remix companion release although it has its very own flavor. IIOIOIOII's musically influences taking inspiration out of all forms of darker-minded Synth-Electronica although the globally mood behind Chris' outfit is fragile and in some cases sentimental. Over all musically influences stands generally Synthpop with Downtempo- but also Ambient-like ingredients. Chris impresses the most with his well-sorted compositions, as they follow clear structures and guidelines.

Same counts for his crafty programming skills. Let's pick out one of the true pearls of the 10 new "Chroma"-tracks, "Haloed Eyes" for example. It's an adorable moody Synthpop tune with fabolous Synth-pads widely thrown into the stereo field and a catchy chorus. Generally I prefer the rather layered and sentimental tunes over the ones which tend to build dancefloor-compatibility. It may belongs almost to his calm vocal performance that this album gives out a sedating impression. It is definitely more suitable to get consumed under a good pair of headphones instead to get dropped into the anonymity of the club-fodder arsenal.

If this crafty and beautiful produced album needs a word of crticism, well, Chris' kind to integrate his vocals into the track follows to my taste a bit too often the same register. His calm timbre sounds well but also relatively foreseeable, at times a bit too monotonous and could need here and there a bit more emotional outbursts to surprise.

Also the second part of this DCD package entitled "Chromatic" needs some introductional words. First off you'll get the usual doze of remix contributions to the original "Chroma" tracks by such projcts among others like Grendel, Adoration Destroyed, Glass Apple Bonzai, or The Rain Within.
Especially the refreshing Grendel remix of "Haloed Eyes" with its saxophone inserts sets a high level and transforms this track to well usable dancefloor tune. Also quite enjoyable are those rather Synthwave-influenced remix works of Glass Apple Bonzai ("Cyan Dream") or The Rain Within ("Digital Moon"). Although most of the remixes here are radical reworkings of the original songs I still think that those contributions only work well regarding business relations. To me the original compositions of the artist are more important and reflect better the musically talent behind. Luckily you'll get rewarded with two further original tracks, "Over" and "Path to Lose".

There's nothing wrong with a purchase of this well-thought produced album and it features a lot of attactive ingredients of Chris Gurney's musically development throughout the years. And since I am quite late (again...) to review it, I must admit, that it perfectly fits from its mood to the beginning of the autumn days. Stuff to sink in under headphones or in front of a fireside.