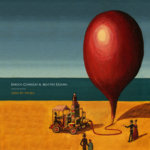 This collaboration between Enrico Coniglio and Matteo Uggeri conducted by e-mail as stated in the liner notes of this release is the result of two complementary forces behind the development of the track. One is the construction of soundscapes based on field recording and samples whose structure is delineated by the beats, the other is the development of melody using acoustic instruments mostly guitar, piano and trumpet. The result is neither abstruse as some experimental music neither trivial as certain pop music.
When "Open To The Sea" starts, there's a sort of displacement happening as, while someone could expect an experimental release, the structure of the track is rooted in the song structure even if in a really oblique way. "Jessaias de reduire mes medicaments" is a delicate sound watercolor introduced by a radio voice. Introduced by some guitar chords, "Up Over The Harbours Lights" is developed upon a piano melody with a beat giving an element of easy listening to an overall structure of evocative romanticism. The voice of Violeta Paivankakkara in "I Am The Sea" marks the start of the first proper song of this album developed with remarkable refinement while "Floating Metal Sheets" is a return of more unstructured form. The soundscape of "Dutch Street Theatre" is an accompaniment for the voice of John Guilor. After a quiet introduction "Now I'm Silent" evolves in a divertissement for guitar and trumpet. "Allarme" is based on the precarious equilibrium between the concrète background and the acoustic foreground. "I Say I May Be Back" closes this release with a proper lied constructed around the voice of Francesca Amato.
Almost impressive in some sonic details (the field recording requires headphones to be fully appreciated in their relationship with the other sound elements), this release in his balance between traditional forms and experimental aims is perhaps one of the albums of the year. Excellent.