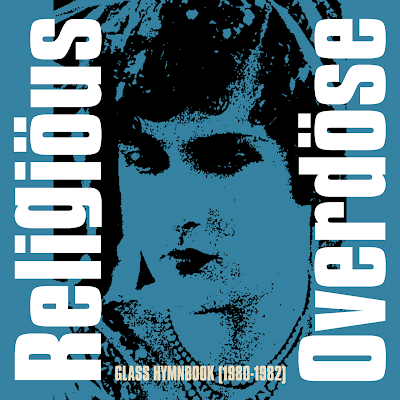 
Glass Records began in 1981, basically to release a single by my band ‘Glass’, for posterity, seeing  as how we’d broken up. Ciaran Harte, who had been the songwriter/singer/guitarist for ‘Glass’ recorded some solo tracks, on his recently acquired TEAC 4 Track, 2 of which ‘Love Is Strange’ c/w ‘Shimahero’ were the second release on the label at which point the idea of a record label became a serious notion.
Religious Overdose, from Northampton, were the first band to send me a tape. It was strange and I liked it. The full sequence of events are lost in the mists of time but basically I asked them if they wanted to make a record, they said yes and, after a trip up to Northampton to meet them and see them play a gig, I got them down to Ciaran’s flat in Poplar, East London to record it. They didn’t have a drummer at the time thus saving his neighbours a bit of grief. For some reason or other we all liked the earlier two track recording of ’25 Minutes’ better than the one Ciaran recorded and used that for one side of the single, with his recording of ‘Control Addicts’ as the other. It sold it’s first run of 1000 pretty fast, thanks to John Peel and the relentless flyer/fanzine attack of lead vocalist Alex Novak. 500 more were pressed and the colour on the label of the second pressing was changed to green from orange and the sleeve to black & white from green & black. We had no real distribution, just word of mouth, selling directly to shops like Small Wonder, Rough Trade, Red Rhino up in York. You could do that back then. People were interested. I remember Geoff Travis himself ringing me from Rough Trade to order 100 more each of the RO & Ciaran Harte releases. It felt like we were part of something. The second single ‘I Said Go’ c/w ‘Alien To You’ was recorded at in a studio in Rushden, called ‘Rocksnake’, with added drummer Pete Brownjohn. Plus back at Ciaran’s they cut ‘Blow The Back Off It’ for ‘The Wonderful World Of Glass Volume 1’ compilation LP. The third single, a 12′” double A featuring two long tracks, ‘In This Century’ and ‘The Girl With The Disappearing Head’, was recorded in a studio in Denmark Street, London (the famed Tin Pan Alley) with myself and Ciaran Harte producing. I fancied myself as a producer back then, and ended up as a kind of executive one I suppose. So there you have it really: 3 singles, a compilation track, and a solo cassette album by Richard Formby – ‘Outside The Angular Colony’ (GLASS 006) in less time than it’s taken putting this CD into production.

Electroaggressionrecords releases the 5th studio album of PYRROLINE on Feb. 14, 2021