Download started as a post-Skinny Puppy project, following the break-up of the famous industrial band in the mid-90s, initially as a collaboration between Cevin Key and the late Dwayne Goettel. Dead Voices on Air mastermind Mark Spybey, as well as Phil Western (AKA Philth) also joined the band. The band has recorded several albums for Nettwerk, Metropolis Records, and Key’s own Subsconscious Communications imprint, and the majority of these have been reissued on vinyl by Artoffact. 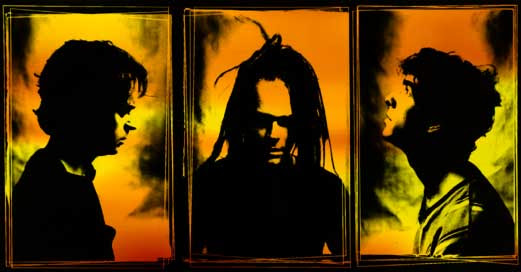 Mark Spybey on recording The Eyes of Stanley Pain:
“Much of the Eyes of Stanley Pain and Sidewinder were recorded within a month, in very different circumstances to Furnace and Microscopic (which were largely made up of edited improvisations) shortly after Dwayne passed away and Phil’s temporary exit from the band. cEvin and I [Mark Spybey] held the fort and Ken Marshall engineered the recordings. Most of the recordings were done by cEvin and me with a lot of help from Ken. There was more of an emphasis on creating coherent song structures featuring more of my vocals. Extended members of the family contributed in passing and Anthony Valcic entered late in the day to help. Anthony and Ken for example did a lot of work on Glassblower, and my vocals were recorded in Bryan Adams’ studio. It all came together very quickly. cEvin and I were determined to create a harsher, more aggressive feel to this album.”

At once accessible and musically very challenging, The Eyes of Stanley Pain has definitely become one of the benchmarks of the industrial style.
—Theo Kavadias, AllMusic

Paolo Tarsi “A Perfect Cut in the Vacuum” 2CD out now

Dark Ambient Act IN THE ABSENCE OF WORDS Reveals Their Compilation, A Collection I