The first question I asked myself when I received this record was quite obviously related to those unidentified tools on the cover artwork. What are thy? A full torture equipment of mad dentist? Primitive fireplace pokers? Mysterious tools for the cleaning of furnaces? Whatever they are, they supposedly landed on the table of the Poznan-based musicologist, sociologist and experimental drummer Adam Gobiewski, who wisely used them to forge one of the most extraordinary sets of really experimental percussive tracks that recently titillated my eardrums. Even though listeners, who cannot really understand this extreme experiments, could tag "Pool North" as the artifact of a sadistic sound artist, this output by Adam, which can not be considered a rhythmical exercise at all, is the exploration of a huge pack of remarkable percussive effects that quickly reaches the threshold of pure disturbances. In the seven tracks of the album, Adam melts over-amplified noises, somehow cacophonous drones, violent scrapes and other bizarre resounding strategies to squeeze intense listen experiences, that unavoidably stimulates the imagination. You could imagine the crazy attempt to hybridize a snare drum, a triangle, a trumpet, a doorbell and who knows what else on the clashing "Decay" or you could experience what a woodworm could feel when his humble abode got turned into toothpicks on the ironically titled track "Ellington Tradition" or you could even think that a hellish monster looking like an elephant seal is trying to enter in your house by forcing an old door and its rusty hinges, while listening to the scary "Manner and Timbre". Some ears could bleed, but it'll be worth.

Alexander Frangenheim: Talk For A Listener

The more I get to know the sound of Berlin-based double-bass player Alexander Frangenheim, the more I appreciate the attitude and the compositional approach of this guy. This release, aged a couple of years - one of those records that I guiltlessly cannot review because some stuff could be submerged by layers and layers of musical and sonic stuff I regularly receive! -, could be considered a sort of appendix if you met Alexander's sound on other occasions, as it includes eleven recordings he took before a preparation day in his own Studio Börne 45. In spite of the title, the parameter that Alexander wisely ignore is the so-called pleasure of its unknown listeners and supposed addressee, as the audience of the title is maybe himself, while his beloved double bass is the speaking entity. The unusual experiments he made on it gives an individual humanity to the instrument, which sometimes gives the impression sounding like covering many different moods of many different interlocutors, and the understanding of the listener got similarly enhanced by the recording technique of the close mic, which managed to grab the breath, the resonances of his interactions with his fair chatter and even the movements and the emotional feedback that could get easily imagined during the listening experience. An impressive set of extended techniques scratched bowing, dissonant contortions and suffocated tones feature this funnily dangerous exercise of humanization of a double-bass by his player/listener...

I got attracted by the name of this aged output within the huge pile of releases from Portuguese label Creative Sources before discovering the German guys behind its named it after the name of a small village between Hamburg and Hannover in Lower Saxony, Germany, they usually visit twice a year. What is more, Gunnar Lettow (prepared bass guitar, electronics, found objects) and Kohran Erel (computer, controllers) decided to title each of the twelve bizarre tracks they included in this output by likewise odd names of districts and almost unknown towns all over Germany - I could wonder in discovering the name of the inhabitants of cities/villages such as Dickfeitzen, Zacking, Grilling or Salderatzen! -. Their style, as you can easily guess, is experimental, as they mainly combine sets of microsounds, percussions, little electronic sounds and hits on many different objects that could easily tickle your imagination. For instance, I finally found a possible soundtrack for those educational posters I saw in many studios of dentists to explain the importance of brushing teeth every day, where grinning microbes set their building site to demolish molars while listening to tracks like "Heirengen" or "Urschalling". I could even match stuff like "Zacking" or Middefeitz" to the amplified noises of the digestive system of a woodworm after a bleeding bellyful of furniture! Check these funny experiments out to understand what I mean!

Juliette Lacroix (cello), Thomas Lachaise (saxophones), Guillaume Ladain (analog synth), Frédéric Roumagne (electric guitar), Jean-Marc Reilla (analog synth, electronics), Didier Laserre (snare drum & cymbals), Julien Sellam (violin), Laurie Batista (vocals), Yann Saboya (electric guitar), Johann Mazé (drums), Eric Camara (bass), Jean Rougier (bass), Tanguy Bernard (tuba), Delphine Lafon (vocals), Bruno Laurent (bass), Claude Saubole (acoustic guitar), David Chiesa (piano frame), Johann Loiseau (flute, small percussions), Thomas Dubois (trumpet), Mathias Pontevia (horizontal drums), Christophe Ratier (bass clarinet), Guylaine Cosseron (vocals), Guillaume Flamen (tuba)...these are the overlapped names (and the instruments they respectively play) on the cover artwork of this enormous ensemble. It includes just six (more or less long-lasting) improvisational sessions, but both the quality of the recording and the almost theatrical vividness they collectively reached is astonishing. Before now, I only knew the name of David Chiesa, who signed a couple of sessions: an amalgamation of dynamics, timbres, resounding matters and musical quotations that he tried to organize over a time line in the exciting piece "Masses" and "The Blue Yonder", the longest session of the whole release, named after and inspired by an half-fake documentary about Werner Herzog, where a set of images taken from the archives of NASA and an Antarctic submarine exploration station go along with the interview of a fake alien, telling the story of its journey to reach out planet from his ocean-covered one and explaining its project of a giant shopping centre between two railways. The overlapping cartographies over three levels (stars, earth, and seabed) provided the instructions (including temporalities and heights) to the playing orchestra! Even its subject could be somehow demeaning, one of the most impressive session is "L'Acceptation d'Elisabeth", the opening one, which refers to the five stages of grief (denial, anger, bargaining, depression and acceptance), described and detected by Swiss-American psychiatrist Elisabeth Kübler-Ross in self-named model: the way by which they musically translated each stage is just astonishing and so vividly that it seems they managed to bridge that gap of verbal incommunicability of a person who sadly experiences them. In between the last mentioned sessions, there's a tribute to the memory of the French brilliant bass player Bernard "Beb" Guerin, where its director, Didier Lassere, tried to turn his orchestra into a sort of "humanly heated synthesizer" - as described in the inlay -, by playing on overlaying, appearing and disappearing orchestral sonic blocks. Such a sonic organization reminded to me the one adopted by Urban Sax, another conceptual orchestra led by Gilbert Artman, who involved Beb Guerin in some of its spectacular sessions. The rule of the game in Bruno Laurent's "HEIN!!!", the shortest output by UN, is likewise bizarre. The orchestra got divided into smaller groups of six players, each of them only knew the game mode and each player had to find a strategy to go from a mode to another on each instrument in a relevant manner...you could vaguely imagine how unpredictable are this interchanges. Another crazy idea is the one behind the final suite "Tenir par là: 174,6 Hz et ses multiples", where everything orbits around the frequency quoted in its title - the first of the 7 major solfeggio frequencies and, according to music therapists, the frequency that could activate DNA, muscles and organs in general by inducing them to operate at optimal performance! -, resulting in a fantastic piece where musicians turns into listeners as well and seems to contribute to the maintenance of this beneficial frequency using their breath and muscles as well. 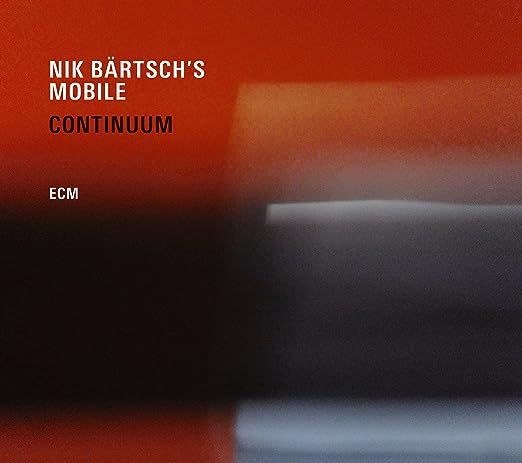 Nik BÄrtsch's fifth record on ECM is his first with the "Mobile" ensemble, which is pretty much the acoustic version of his main band "Ronin" (which adds a bass player to the line up).
I have seen both Ronin and Mobile live and both are amazing experiences, engulfing you in a vortex of patterns and sounds, and from what I can hear on "Continuum" the CD experience is very much true to the live experience, save for the fact that the CD has some cuts with a string quintet as well.

BÄrtsch's composition and dexterity on (and most definitely also inside!) the piano are complemented by Sha's bass and contrabass clarinet and by the tuned percussions, drums and multiple bass drums with different tunings played by Kaspar Rast and Nicolas Stocker. The whole experience is a very rhythmic one, where even the clarinet, who one might expect might soar over everything else, in fact, quite to the contrary, becomes a very integral part of the rhythms itself, playing a bass part in a very percussive part way. The dynamic and tonal range of the percussions is comparable to that of the 88 keys of the piano, and stretches all the way from the low rumbles of the 32" concert bass drum to the piercing icicle sounds of the xylophone, which often blends in subtly with the upper register of the piano notes.

The music is so expansive, it makes you forget time, in spite of the fact that it is all about time and its subdivisions... Somebody is quite obviously doing a lot of counting. Plenty of odd meters to be had for all you math-musicians out there, but more importantly plenty of gorgeous and masterfully executed suites of trance-inducing soundscapes that definitely well understand and embrace the concept of tension and release, which is so important in music.

It's hard to imagine, let alone describe, a band like this, but suffice it say that it is some of the most creative use of variation enriched repetition I've heard in a long time, along with those of Philip Glass. And just like Glass' compositions, BÄrtsch's capture, engulf, fascinate and enchant, except they do so in a more assertive, almost endearingly aggressive way, if you will, that almost has an undercurrent of stealthy military-on-foot-like advance and proud royal samurai-like dedication (if you take a hint from the composer's kimono clothing and occasional Japanese-in-performance-like short-upper-throaty-screams it all makes sense) under the commandeering direction of its main composer and leader.