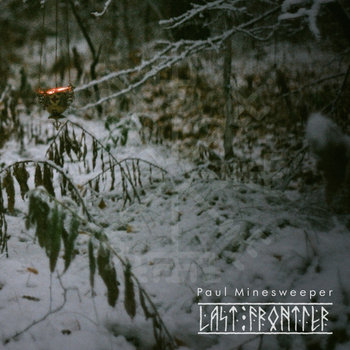 This release is described by a poem by M. Gidlevskiy about abyss as a symbol of something which pushes someone to begin a spiritual journey. The music by Paul Minesweeper stands in the school of dark ambient which adds ethnic elements i.e., traditional instruments, to the drone's infrastructure with the result of creating a link with his cultural heritage.
"Clarions Of Arrival" opens this release with a structure based on a drone acting as a gravity center for other musical elements as samples or guitar sections which remind to metal territories. "Siren" is instead a more canonical track based on a drone whose elements slowly unfold. The synth of "Icebound" starts to create a sort of solemn atmosphere that is doubled by the guitar as they are in two separate region of the spectrum, a low one for the guitar and a mid one for the synth. The drone of "Farewell" is so rapidly changing that is almost depicts a melody while "Solid Heaven" is developed upon distorted sound sources. "Oculatory" and "Dissolve Me" are relatively canonical dark ambient exercises while "Nomad Amongst Stars" is characterized by the present of samples in the background creating a sort of narrative about the theme of travel which found his rest in "Last Frontier". "Beyond" closes this release with a meditative drone.
This release has two sides, as it was a 12", the A side (the first five tracks) is impressive as it's able to craft the elements of dark ambient and drone metal in a cohesive whole revealing a defined personality while the second side is a little too predictable in his development. However, it's truly recommended for fans of drone music.