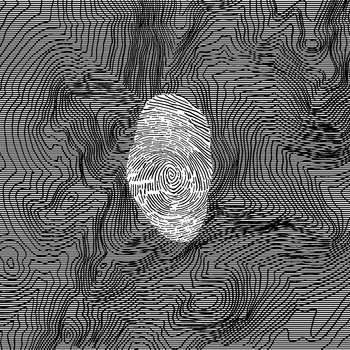 The coordinates of the enigmatic title "49°05'19,3"N22°34'04,0'E", according to Google Maps, refers to a place at the borders between Poland and Ukraine or it could be a place between Poland and Slovakia, the countries of the two artists responsible from this release, Strom Noir and Micromelancolié. The cover art is an hint on fingerprint as the theme of the release, not only cartography as it's based on an altimetric chart, so it could be a metaphor of security concerns related to migratory flux.
The first track, or part, of this release starts with a drone which is juxtaposed by field recording from something walking and a whistle introduces the first sparse note of the guitar of Strom Noir and suddenly the atmosphere became darker and a sense of stillness pervades the listening as something has to happen. In fact, there the depiction of the exploration of an uninhabited area or a moving from a city and, so, the track ends with sparse noise and the reverberated sound of the guitar upon a bright drone which slowly evolves and fades. The second part of this release starts with a drone that evolves on a crescendo while the underlying field recordings continues to generate that sense of exploration and, after its peak, it became to descend upon some metallic samples as someone plants a pole or a fence as this recording is present when the drone ends to close this release with the last beat on the fence.
The sense of work of art is on the ambiguity which alludes to something outside of it and challenges the listener. This release could be a report of an exploration or about a reflection on borders that are strengthening every day passing. This is obtained from a series of subtle interactions between samples, sound and artwork and it's something aiming to something else than a mere work on a codified form. Almost a masterpiece.