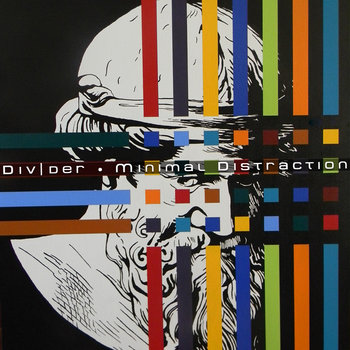 Basic Unit Production isn't a new established label but both haujobb.-protagonists Daniel Myer and Dejan Samardzic are using this name to publish their very own musically efforts. Relatively new is the fact that they have recently decided to open the gates to foreign music-projects and to release some goodies in both formats, limited physically editions and of course to service the growing digital market. The first activities have been the release of a compilation entitled "Frost" in early 2013 as well as a debut-EP by DSX, the Experimental Electronica solo-project by Dejan Samardzic. Also DivIder isn't at all a bloody newcomer project, but a US-based Experimental EBM-project already active since the mid-90s. Actually they have been existed pretty much under the radar of higher recognition and could release, as I had to learn, three physically albums. As being kids of times when EBM/Industrial has had meaningful heydays, it shouldn't wonder too much, that DivIder's music is obviously infiltrated with a strong dedication to those nostalgic days. This digital-EP consists of two original tracks plus some fair remix contributions. The sound outfit already presented on the main track "Minimal Distraction (feat. Jasmin Yas)" reminds on some early-90s projects like Johnson Engineering Co., Electro Assassin, or FLA to their "Gashed Senses" era. Also positive to hear, that all remixes of this main track are trying more or less to pick up the vibe of the original, while they also include attractive ideas of their contributor. The 'Holm/Mirland Remix' for instance pushes the speed of the track to a higher level and adds a mind-blowing snare-drum. A second track entitled "Relentless At The Heart' featuring Martin Sax (T.W.A.T.) on the main vocals got featured too and is available in the 'Radio Edit' as well as in a remixed version by the prominent Aghast View follow-up project Aesthetische. While the 'Radio Edit' forges the steel through nailing old-school EBM-like bass lines, the Aesthetische-remix adds a post-modern vibe through fresher sounding, very dancefloor-compatible rhythm- and bass line parts. If I said this often enough to their predecessor project Aghast View in the past, this also counts for Aesthetische: the remix-abilities of this Brazilian project are always exciting and hit the nail! Even if this is meant only as an appetizer of things to come from DivIder, it is mouth-watering and filled with many ideas reflecting the often pronounced better days of EBM. Attention got awoken in high amounts for the upcoming album!