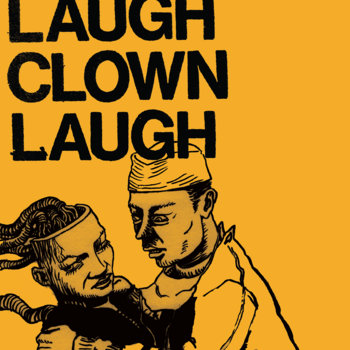 Born in early 80s in northeast Somerset town of Frome (100 miles west of London) and formed by Sam Findlay and Dominic O' Brien, Laugh Clown Laugh released only a song titled 'Feel So Young' for the 101International 2LP compilation "Abstract" in 1984. With an equipment made of SCI Pro One mono synth, Korg MS20 mono synth, Roland TR606 drum machine, (LinnDrum on "Feel So Young"), Teac-32 2b 2 track Reel to Reel tape recorder and a Teac-2a mixer, they recorded different tracks on their living room during the 1982-84 period and they prepared a tape that I don't really know if they ever released. Anyway, decades after their recordings the Crispy Nuggets blog (crispynuggets.blogspot.com) used their "Feel So Young" on their compilation and things started to move. Troy of Medical Records got interested and contacted the band and they restored the home recordings you can find on this eleven tracks compilation (the twelfth is a dub version of "Feel So Young"). Inspired by early 80s synthpop the duo created their own style that mixed pop melodies with new wave darkness and also a certain will to experiment which you can find on certain early Depeche Mode or Yazoo tracks (for example "Big Muff" or "I Before E Except After C") as you can check on "Track 14" and "Aquarium". They had the rough coldness of synth noise as well as the warmth of those sounds and they had the freshness of kids that play with something new and the will to express themselves. As the info sheet reports: this LP will certainly appeal to fans of earliest Human League, Oppenheimer Analysis, and earliest Vince Clarke era Depeche Mode (but even more sparse). Presented on 180gram transparent orange high-quality vinyl in a limited edition. Bonus insert included as well with liner notes by Kurt B. Reighley and other tidbits. Check the whole released and purchase it here http://medicalrecords.bandcamp.com/album/laugh-clown-laugh-mr-025