The Phone: Songs For This Nuclear Age 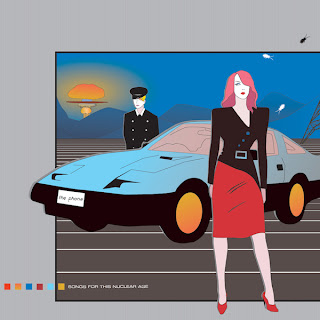 The Phone is the minimal synth musical project of Johnni Mogul. He released something under his own name about ten years ago but I don't really know how it was. Anyway'Â¦ "Songs For This Nuclear Age" is The Phone's first album as well as it's the first 12" release for Attractive Co-ordinates, Steve Lippert's label which is exclusively distributed by Anna Logue Records. Limited to 500 copies, "Songs For This Nuclear Age" contains fourteen tracks. Three of them were available on the first two 7" EPs previously released but two of them are new versions and are: "The Phone - Version 2", "Cabaret Noir" and "Discreet Affair - Version 2". The album containing synthpop songs as well as minimal wave cold chirpy sounding tracks (like the opening "Inner Refuge", "Element 115" and the closing "When The Warming Sound"), is well balanced and offer about forty minutes of 80s influenced sounds. Tracks like "Perspex", "Jonni" and "Cabaret Noir" sound like outtakes of Soft Cell's first self produced 7" "Mutant Moments", while "Pylon To Pylon" or "Nuclear Winter" have the same post punk urgency of late Ultravox / early John Foxx. Jonni succeeded into making the songs sound his own and made a great album which contains cool analog synth sounds, catchy melodies as well as bites of experimental solutions like the noisy synth inserts on "Zero Dub" or the great chirpy frequencies cavalcade of "Inner Refuge". Be sure to check out this release. You won't be disappointed!