RED FETISH: The Future Is Now In Your Hands 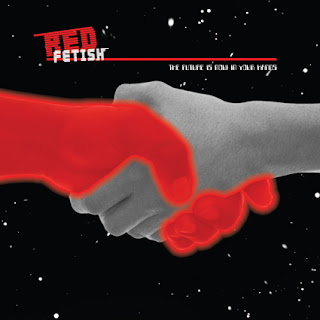 THE FUTURE IS NOW IN YOUR HANDS is a red 7" which contains four tracks recorded in 1982/83 by Red Fetish. They were a duo formed by Neale Potts and Mike Richardson from Stoke-On-Trent, Staffordshire, UK (both of ALL THE MADMEN fame) and using few synths like the Korg KR-55, Korg 770, Korg SD-900 and Yamaha CS-10 recorded a full cassette that never got distributed because of lack of interest. Like happened with the Transparent Illusion album reissued by Anna Logue Records, now we can know a band that for sure deserved that attention they were asking for. Those were the times of nuclear fears, big brothers and several others real or waited for catastrophies and the lyrics of "Stages", "Modern Age Of Modern Machinery" and "The Last Man" were reflecting the things that the kids of those times were thinking/feeling. Musically, the tracks are minimal synth pop catchy tunes: we start with the fast "Stages" just to pass to the menacing atmospheres of the instrumental "Abandon Tip". "Modern Age Of Modern Machinery" is a mid tempo with dreamy vocals contraposed to the synths/drums stinging sounds. The EP is closed by another hit titled "The Last Man", a song that sound epic and pop at the same time. It's sad to say it thirty years later, but I hope that they'll get the attention they deserve.