since 1994, your no.1 source for electronic, industrial, ambient, dark, experimental & new music...
«« Previous Review (Whispers In The Shadow) ⟺ Next Review (Lazyfish/Mewark) »» 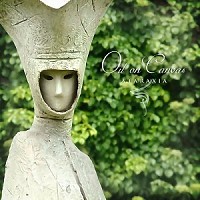 Ataraxia is an Italian neo-classical/darkwave band who's been active since the eighties and has been releasing record after record to the delight of the scene they cater to. I have fond memories of Ataraxia and remember them since the days I used to live in Italy, so I was happy to find out that they are still active and that they have a new record out. Lyricist, vocalist and flautist Francesca Nicoli, the leader of the band, partnered up with composer and guitarist Vittorio Vandelli, to bring us 14 songs of haunting music and poetry. Ataraxia is probably amongst the most active and long-running neo-classical/neo-folk groups and if you are not already amongst their fans you should check them out if you like music by Dead Can Dance, Cocteau Twins, Death in June, The Moon and the Nightspirit, Mephisto Walz, Butterfly Messiah, The Soil Bleeds Black and maybe even Sol Invictus and Current 93 (especially now that there is so much acoustic guitar to be had along with the long shimmering pads, the ethereal sustained layers, the martial percussions etc).
Although as a producer myself, I might have one or two qualms about some pitch issues with some vocals here and there or even with the opening guitar arpeggio of the album, these things can be overlooked in favor of the entirety of the work. Synthetic strings and pads counterpoint classical guitar arpeggios and support the dramatic vocalizations and the recited multi-language poetry sometimes borrowing from celtic or greek aesthetic and sometimes accenting with apocalyptic drum parts.
The Hong Kong based label that released "Oil On Canvas" made it available as a standard CD and as an absolutely stunning and gorgeous limited edition CD+book in which the CD comes in a digipack and is housed (along with the book and some postcards) inside a black hardcover box set. The book contains verses of poetry by Francesca Nicoli translated in italian, english, french, spanish and german and contains beautiful photos by Raffaella Graziosi (abandoned buildings and objects), Mick Mercer (mysterious and ominous statues in gardens and courtyards - the same type of statue that you see on the cover) and Livio Bedeschi (the elements of nature). This packaging is so unique and sensational that it almost risks to overshadow the music itself. If you can still get your hands on one of these 800 pieces you should absolutely do so and enjoy it page after page, verse after verse, note after note, track after track.