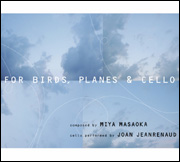 Second review for this american composer so deeply immersed in contemporary classic music. While her first work on Solitary b (her own label) I’ve happened to review was dealing with a composition for choirs, this time she turned the page and showed how assorted the universe of a talented musician can be. "For Birds, Planes & Cello" as pointed out by the notes is a work for field recording and cello that brings much more the music of Masaoka into a field-recording/experimental context. While the field-recording is quite ordinary for many expert listeners of the genre, don’t look for any particular sound definition or for any sound rework a la Steve Roden or Francisco Lopez, I think for Masaoka is more important to pay attention to the way in which the cello is sailing thru the field-recording. The sound of the planes and some cello’s low registers for example are so similar that’s hard to get if the bow of Joan Jeanrenaud is moving and the consequential mirror game left me wondering if this or that sound were part of the field-location or part of the performed music. I repeat, sometimes it all become really cerebral and it’s hard to get if she’s trying to push the listener close to the border of perception or (as I believe) it all gets functional for the gradual emersion of the cello in the middle of the cd. Right after having left the instrument materialize from the ambience, it sinks again in the depth of the audio context with birds, planes and the rest of this airport environment and it slowly reappears a bit later as something pulsing underneath. I got the impression sometimes Masaoka chooses to leave more cello to have a sort of a contrapuntal use of the different elements, thus the cello is functional for the field recording but it’s also true that the field recording is functional for the instrument as well. During the last section of the work it all becomes really silent and soft I must admit the impression is the atmosphere becomes unreal, but don’t worry while approaching to the end of the work all of the "actors" are on the stage but don’t wait for a grand finale since it’s quite soft an rarefied. Interesting work.