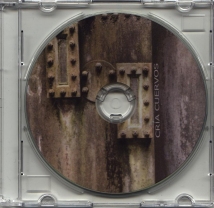 Lately I was talking with a friend about 3" discs and about the fact that's probably the most appropriate format for some genres. Be it the 3" dimension or the incredibly improved sound quality of the release, but Cria Cuervos has become a top notch "isolationist". Here you have a soft mechanical drones in slow motion that keep increasing for almost ten minutes. The sound grows slowly like a cancer, the atmosphere is cold as steel, and is as lysergic as an acid pill. This short "cold trip" stops its slow march all of a sudden and the listener is left with no ground to walk upon, after this violent interruption the suite starts again with a low echo from nowhere. With the second "movimento" an odd drumming awakes like a mammoth back from the ice age. After having reviewed several releases composed by this italian musician I have the impression he keep on spending the most of his days into a freezer cause if you ask me: "cold" would be the adjective I'd use to label his music. Cria Cuervos not unlike Lustmord has a soundtrack mood that could go really well with images, that's why is hard to deny this 3" was probably meant to be a one way ticket for visionary people. The comment is: "Severe music for heavy falls".