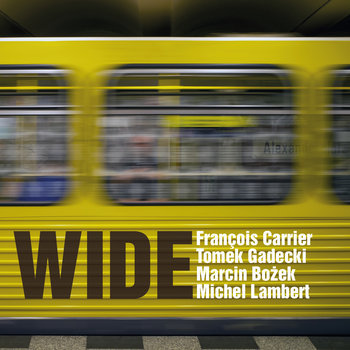 During the years François Carrier has released a number of release with whom has established himself as an interesting voice in Free Jazz. This new album documents a concert at MÓZG in Bydgoszcz, Poland, and features the canonical duo of François Carrier and Michel Lambert in a dialogue with Tomek Gadecki and Marcin Bozek which has the task to add a sense of novelty to the whole.
The concert is divided in three section: "Wide" revolves around the dialogue between alto and tenor saxophone with the rhythmic section as a support, at least for the first part, until a solo interlude by Carrier introduces the second half of the track where the use of the french horn by Bozek marks a section where there's a slight timbre research juxtaposed to a call and response. The third part is a return to the form of the first part. "Radiancy" is a movement from an almost lyrical first part based on slow melodic lines by the saxophones to a second part based of faster lines which give musical space to the rhythmic section to escape from the role of accompanyment. "Leeway" lasts just over half an hour and ebbs and flows between quiet and fast moments and shows, apart from the technical skills, the players sense of measure to give a moment for everyone.
Even without any particular novelty in its form, this release transmits the joy of playing together of the artist and this quirk, in times of inflexible individualism, get some fresh air to the listener. Recommended for fans of free jazz.