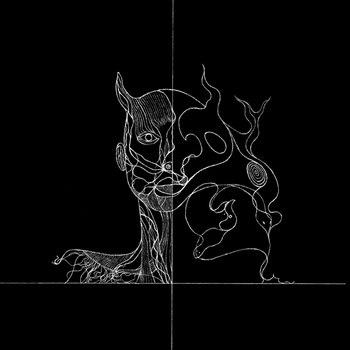 Apparently it's a new name but Sphyxion is the minimal wave project of Frédéric and Olivier Charlot, better known as Maninkari. While their main project it's at the crossroad between classical and experimental influences, this one is more enjoyable as it makes heavy use of rhythm box while the drones frequently evolves in melodic lines and the use of female voices gives a pop touch to the whole. As the tracks are untitled, they will referenced by their number.
The first track opens this release with a structure centered a rhythmic cage and a buzzing background; as a voice is looping the effect is hypnotic. The melodic apertures of "2" reveals the influence of minimal wave and "3" inverts the canonical form of this genre as the synth is almost metronomic while the rhythm is slightly variated. The vaguely middle eastern pattern of "4" are matched by a rolling beat and "5" borders IDM with its complex but sonically skinny beat. "6" is catchy with its sort of glockenspiel used to expose the main melody. "7" is the first track not using a beat while creating a minimal lied with repetitive, but slowly variating, string melody. "8" use the amplitude enveloper to create a rhythm out of a oscillating melodic cell. The synth melody "9" emerges after misleading the listener with its introduction hinting a static track based on loops. "10" closes the release with a minimal wave track almost canonical but avoiding triviality.
With a more easy listening framework, it will probably attract more listener than the average Maninkari's release but they could be disappointed if they won't be patient enough to capture the subtle nuances in a apparently static form. Listen with care.