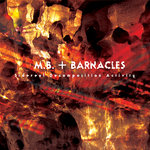 It's almost a decade that Maurizio Bianchi, which needs no presentation for readers of this zine, and Matteo Uggeri, mostly known as a member of Sparkle in Gray, collaborates in some form. As their previous collaboration this are based on relatively quiet framework where the ambient textures of the late M.B. are introduced in a more constructed sound building.
While many could expect an harsh noise wall, "Infinity Cosmic Eruption" introduces the listener into a release where ambient music is bound in a rhythmic cage that is at the crossroad between hip hop and dub, so it's impressively dilated in time and takes in the background the noisy element which is used to create a subtle sense of movement in an apparently static rhythmic development; its quiet ending introduces "Sidereal Decomposition Activity" whose catchy noisy and almost psychedelic melody is underlined by the rolling beat interrupted when it's time for a break prior to the final dreaming end. The metronomic beat of "Astral Fall Dynamism" is the set for the dialectic between noise and folk guitar melody of the first part of the track while the second one tries to bury the melody with synthetic layer only to close the track with menacing oscillators. The crescendo of "Unearthly Armagheddon Energy" is as linear as it's ended leaving only the element that creates tension without the elements that has rhythm or mass.
Moving towards a more developed music style rather than a impressive mass of sound or quiet ambient, this release shows two artist that are willing to evolve rather than simply publish another record. Recommended.