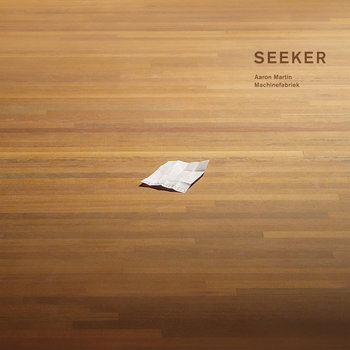 To celebrate his fiftieth release, Dronarivm releases a work conceived in 2013 for a dance piece by Iván Pérez called "Hide And Seek". As I believe that there's no need to introduce neither Aaron Martin nor Machinefabriek, I will go straight to the musical point: the interaction between the instruments, mostly cello, played by Martin and the electronics played by Zuydervelt. The music could be roughly classified as glitch or modern classical in respect to what is considered to be real center of interest or writing.
The canonical glitchy opening of "Wake" introduces the listener in a framework which is immediately reversed by "Wings in the Grass" rounding around a romantic cello melody. As "Arms Turn Slowly" develops there's a movement from abstraction to the song introducing a quiet piece as "Leaves Are Swimming" reminding the quietest moments of Machinefabriek's discography. "Hidden" is a minimal ambient interlude to the second part of this release. "Seeker" is an hook to the tradition of dance music with his evocative cello melodies while "A Small Crowd Points" and "Close to Dark" evolves around drones, focusing on sound details. The voice of Aaron Martin closes this release in "Buried Cloth" creating something similar to a sense of peace.
While it doesn't sound as a simple accompaniment for a ballet, it has a sense of completeness that doesn't need a visual counterpart. Perhaps this couldn't be exactly a virtue for a music conceived with a precise objective but it's surely best for the listener. Another example of clear talent.