Wanna Dance is a 20-minute mini-album from the Italian noise punk outfit. It’s predominantly a set of two-minute-long noise walls of guitar, uptempo punk drumming, distorted angry vocals and stretched, uncomfortable-sounding synths and some experimental lo-fi electronic sounds adding texture. But underneath it there’s a songwriting quality and intelligence that raises it well above the average angry garage band. Tracks like the title track may sound dumb at first listen, but there’s an infectiousness to them and in some ways this is speeded-up, revved-up pop music in punk costumes.

Some of it’s rather earnest, like the only long track “Alter Ego” with its sweary lyrical frustration gradually getting mirrored by the music, or “Champagne”’s barely channelled raw fury.

There are more tongue-in-cheek moments though. “Your Duck”, with its bouncy two-note synth pattern and Iggy Pop-parodying line “now I wanna be your duck”, is the sound of a band not taking things too seriously.

This is the sound of a punk band maturing well, without losing their heart.

Ask any rivethead about Einsturzende Neubauten and you're likely to get a "yeah man, they're great!" response. Likely they will know the name Blixa Bargeld, leader of EN. If they're really a longtime fan of the band, they may even know the name Alexander Hacke (EN's bass player) as well. Hacke is 1/2 of hackedepicciotto, the other half being Danielle de Picciotto, an NYC gal who moved to Berlin in 1987 to become the lead singer of the band Space Cowboys, co-initiator of the Love Parade, a collaborator of the Ocean Club with Gudrun Gut, a member of Crime & The City Solution, and also Alexander's partner in crime. 'The Current' is hackedepicciotto's fourth album, and possibly their most powerful one yet. For this release hackedepicciotto has amped up the percussive aspect of their music to create a powerful rhythmic feel, a wilder and more danceable element. Hacke's background with Einstürzende Neubauten can be felt in the many rhythmic tracks. Danielle's considerable contributions include violin, autoharp, hurdy gurdy, vocals, spoken word and electronics. And there is a fair amount of spoken word, giving the album a somewhat political flavor. Politics aside though, this is excellent experimental music, at times in the vein of Swans, at others Einstürzende Neubauten, with some passages reminiscent of Legendary Pink Dots, the electronic minimalism of Suicide, and others. 'The Current' is by no means a minimal album though; in point of fact, quite the opposite. It often sounds huge, much bigger than a 2-person project. There is not a single concession to "pop" on it, which I find quite refreshing, although the music isn't so esoteric as to be inaccessible. The overall aura is melancholic with a grim determination to leave stagnation in the dust. A good number of tracks have that Swans' improvisational feel, and there is a generous infusion of swirling psychedelia as well. de Picciotto's elfin voice adds an exotic element that saves things from becoming too dark and dour, and is a nice contrast to Hacke's more austere vocals. 'The Current' is where modern industrial music should be heading, not a rehash of KMFDM, FLA, Skinny Puppy or NIN dance music. (Not that there's anything wrong with that.) The album is being released January 31 on Einsturzende Neubauten's label Potomak, and I think they've got some upcoming live shows at venues in Europe. Einstürzende Neubauten has a new album ('Year Of The Rat') coming out soon, and a tour as well that I'm sure Alexander Hacke will be participating in as well, so it looks like 2020 will be a busy year for hackedepicciotto. 'The Current' is a worthy album you should just pick up on my say-so, Neubauten fan or not, you'll thank me later.

“Ecstatic astonishment…” these words, found in the lyrics of the third track called “Splattering Purple”, perfectly describe my reaction to this album.

Flying Stag is some kind of a thrash metal rooted songwriter's album – stripped down to drums, guitars and voice. It’s loaded with catchy guitar riffs and odd meters, there’s even a decent touch of djent and industrial here and there, with some kind of punk attitude in the mix.

It doesn’t surprise, since Daniele Brusaschetto started off as a thrash and death metal musician in the 80ies. In the 90ies he took new creative paths and played in bands such as Whip (industrial), Mudcake (noise rock) and Down! (avant-garde/impro). With Flying Stag he goes back to his metal roots – with 90ies metal guitar sounds, versatile playing, catchy riffs and short solos. The drummer, Alberto “Mono” Marietta, is doing a truly impressive performance through the whole record - with an absolutely great drum sound! Almost modest in his playing (thereby giving a lot of space to the voice and the guitar) – always supportive, a very solid and straight forward drumming.

From the very first heavy riffs of the first song “Otherwhere” this album totally kicks ass! This track, 5 minutes long, takes interesting twists and turns in regards of structure. I would like to highlight here, that I absolutely loved the vocals on this track. It reminded me a bit of a Marilyn Manson kind of singing, paired with the the non-chalantly, charmingly snotty attitude of a rebellious, young Joe Strummer (The Clash), and yet, the singing is also soulful at the same time. This singing style took me by total surprise – in the best way possible – because it makes this record sound really personal - like a songwriter’s album - which gives a creative contrast to the heavy intensity performed on the guitars and drums.
This contrast gets even more emphasized on the second song “Stag Beetle”, especially in the mid-part of the song, when Daniele takes his voice to the higher register: it almost sounds like Peter Hammill singing metal. This is a wonderful momentum and I think, Daniele could do this more often!
The intro of “Splattering Purple” sounds like a metal tango dance between guitar and drums and then it totally leaps forward into the heaviness of oldschool metal as we heard it on the tracks before, but with different stylistics. This tracks also introduces Daniele’s growling skills.
“Splattering Purple” is followed by the very intense and creative “The Unreal Skyline”, which is my personal favourite track on this record. There are moments on this song which remind me a bit of the first record of Stone Sour. This track is really dark and rich in sound.
“Like When It’s Raining Outside” is the longest track on the record (7:36 minutes), a very interesting, colourful song – revealing the arranging skills of Daniele. Then comes the maybe heaviest and angriest song of them all, called “Fanculo Mondo”, featuring Daniele’s maybe thrashiest guitar playing and also a lot more of his growl skills. The last track “From a Tight Angle” summarizes the “peculiar metal nostalgia”, as I would describe this record, into one big final crescendo before “Flying Stags” leaves its listener in the aftershock of an “ecstatic astonishment”.

Flying Stag is a bold album, skilfully played, but never ostentatious. Total headbang-material, oldschool metal and punk spirit with unconventional songwriting – a combination which makes this record so astonishing and almost, as I mentioned it before, a bit peculiar. At the same time, Flying Stag is a very honest and personal album of a versatile musician, who already walked a long journey of many different stylistic paths in music, and who is courageous and mature enough - as a songwriter as well as a guitarist - to insert experience and skills without bragging – and yet, without understatement either. His own musical language is balanced, rich and always present through all seven tracks. The album is very saturated in sound and ideas, but it never sounds like “too much”. And best of it all: it absolutely NEVER gets boring! It’s an album I loved to listen from the beginning to the end, four times in a row. The only thing I missed sometimes was the depths in the sound spectrum, due to the absence of bass, I guess – but maybe it’s also just my listening habits and my personal love for low frequencies.
I am sure, the musicians had a lot of fun playing this music, this is obvious and a pleasure to hear. A big compliment from my side to the two musicians, Daniele Brusaschetto and Alberto “Mono” Marietta, who involve the listeners with their attention and curiosity from the beginning to the end. Absolutely recommended!

'human kind ~ animal mind' is German electro-rock band Soulimage's second album, the first of which I've never heard. Rob. E. Soul handles the vocals, synths and drums while Patty Juhasz takes care of the guitar work. With a little help from their friends (Shir-Ran Yinon from New Model Army, violin on a couple tracks; Michael Erhard - bass on all tracks; and Conny Eberl - second vocal on a few tracks) they put together this album mixed and mastered by prolific German music producer Hitlon Theissen. 'human kind ~ animal mind' is bound to be a turning point in the career of this electro-metal band because it's a powerful trip, incorporating elements of NDH, Darkwave, alt-metal pop that is straight-on powerful. Soul's distinctive bold and potent vocals fit the music like a latex glove, whether he's in melodic mode (most of the time), or in harsh death growl mode (less often). The songs have more hooks than opening day of fishing season. Lyrically, the songs are a good mix of relatable themes without resorting to the mundane or LCD, and not over-intellectualizing. The tracks are forceful without beating you over the head. The one thing (and it's only one thing) is that this sounds very slick and polished; maybe too polished. However, it's hard to fault a well-produced product that sounds excellent. How it will resonate with listeners at large remains to be seen, as the album isn't slated for release until May 31st. 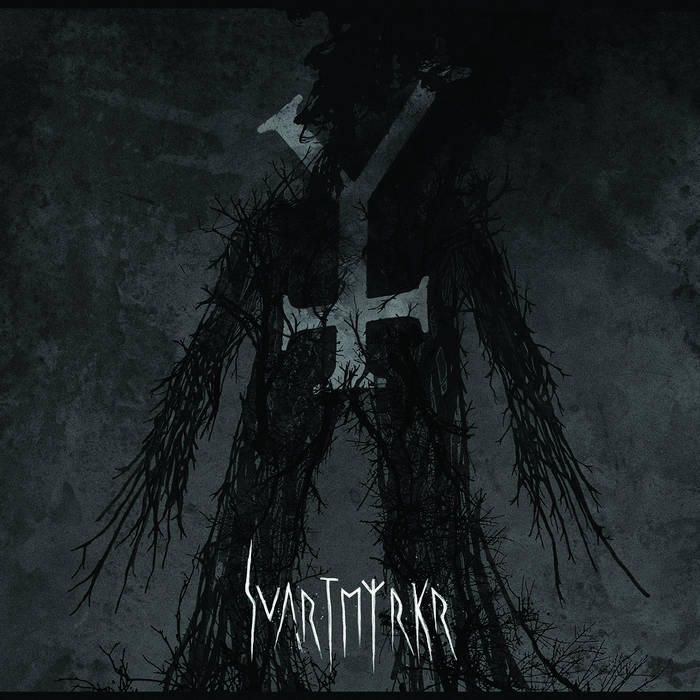 Thirteen years after "Infernal Affairs", the godfathers of black industrial returns with a new release that could arise every sort of doubt about how time affected their music. "Ulvens Broder", the EP which has anticipated this release, hinted an evolution towards a more layered, and subtle, sound in place of the harshness at the core of their classic album. "Svartmyrkr" is surprisingly an evolution towards a more atmospheric musical framework where noise has a restrained, but important, place.
The field recording of a fire pit opens "Äntra Helstraffet" which evolves in an evocative soundscape made out of sample, sparse drum beat and distorted vocal and ends in an explosion introducing this release. The pounding beat of "Öppna Hegrind" is almost hidden by the haunting screaming and the noises used as elements of a soundscape instead as bricks of a wall. "Codex Mendacium" is a crescendo where noise emerges from a quiet drone. "Ulvens Broder", which anticipated this release, is confirmed as the track which condense the musical elements of this release. "Helblar" is an interlude which seems quiet as uses sustained tones, instead of noises, and resonances. "Ulvens Bleka Syster" features fast string, closer to the ones used in sound tracks to mimic the exiting of bats from a lair, and abrupt stops. "Burn Your Temples, True Change" is quiet a metal track, as it's based on acoustic and electric guitar, and reveals the aim of the band to find new way of expression. "She Who Offers Sorrow" is a return to the noisy assault of their first albums while "We Are Eternal" sound as their version of neofolk with its acoustic drum, the trumpets and the epic atmosphere. "Lokastafr Ablaze With The Thorns Of Death" closes this release with an suspended atmosphere using drones, drums and sparse noises.
A lot of bands would simply exhumed their old sound to please their old fans placating their nostalgia. Ulvtharm, Nordvargr and Drakh have instead decided to move their sound one step towards other territories using crafts instead of impact. Highly recommended.