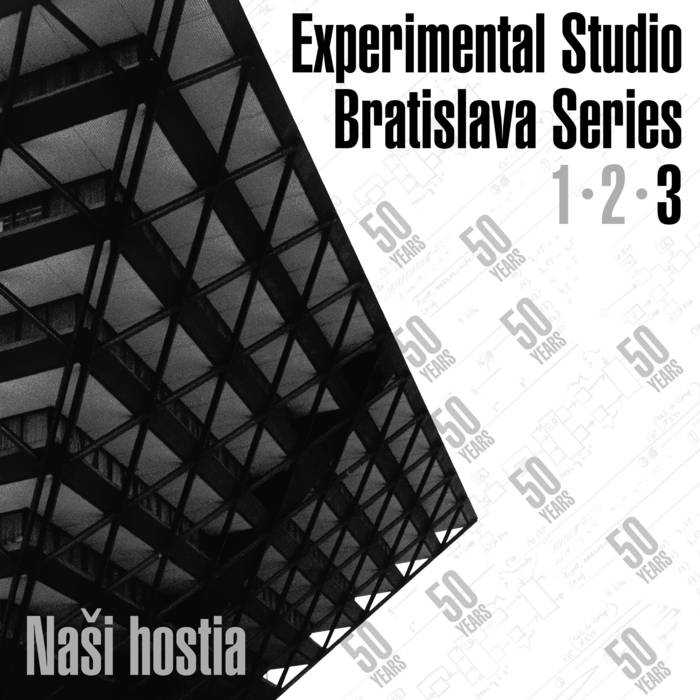 Born to celebrate the 50th anniversary of the Experimental Studio Bratislava, Slovakia, the "Experimental Studio Bratislava Series" arrived at its third and final volume. The first volume was focused on the pioneers of the Slovakian scene, people like R. Berger, P. Šimai, I. Zeljenka, Ivan Hrušovský, Jozef Malovec, Peter Kolman, etc.
The second volume was focused on the newcomers, with tracks recorded mainly in the 80s by people like Milan Adamiak, Martin Burlas, Robert Rudolf, Svetozár Straina, etc. The tracks on the first volume have been composed and recorded with self-made studio equipment and electronic devices, thing that was the norm for recordings made in the 60’s and 70’s in Bratislava. On the second volume, we can see the increasing of the use of Western equipment like the Studer 907 with console, etc.. This technical development has allowed the developing of the techniques and ideas in sync with avant-garde composers who were living the other side of the iron curtain like: Karlheinz Stockhausen, György Ligeti, Pietro Grossi etc. The third volume is focused on the guests who visited the Experimental Studio Bratislava. Composers like György Ligeti, Lothar VoigtlÄnder, Liviu Dandara etc. participated at the annual International Seminars on New Music in Smolenice, Slovakia. The first Seminar held in 1968 was opened and attended by Karlheinz Stockhausen – playing his “Hymnen” for the first time abroad – for the Slovak composers an ear opener and a learning process on how “to make” this kind of “music”… In the following years New Music personalities like Ligeti, Mauricio Kagel, Lutoslawski, Gorecki, Sofia Gubajdulina etc. attended the Smolenice Seminars. On this volume we have seven tracks: "Poème Symphonique for 100 Metronomes" by György Ligeti, performed and recorded in Smolenice Seminars, 1969. Liviu Dandara, a Romanian composer, with his electro acoustic composition “Affectus Memoria” that shows his artistic development after his studies in Darmstadt. Milan Slavický, born in Prague and deceased in the same city in 2009, studied musicology at the Faculty Of Philosophy in Prague and composition at the Janacek Academy in Brno, recorded in 1982 "Variace Na Laserový Paprsek". Georg Katzer studied piano and composition in Prague and East Berlin. In 1982 he founded the Studio For Electroacoustic Music where he was the artistic director until 2005. He recorded in 1976 "Rondo". Lothar Voigtlaender studied at the Leipziger Musikochschule and in 1984 joined Georg Katzer to form the Society for Electroacoustic Music in Berlin. "Meditation Sur Le Temps" is his track here and it has been recorded in 1975. Zoltán Pongrácz was an Hungarian composer who taught in different parts of Europe (also in Cologne with Stockhausen, Pousseur, Ferrari and Jaap Spel. He's here with "Mariphonie", a track recorded in 1972. Alois Pios is the last composer of this compilation and was a Czech composer and music pedagogue. He studied at the conservatory and the Janacek Academy of Brno.He tought in Prague, kept master classes, gave lectures and conferences across Europe. In the 60s he promoted avant garde music in Czechoslovakia and for this reason he has been persecuted for twenty years, from 1969 to 1989 having all his work banned. "Speleofonie" has been recorded during this time, in 1976. As for the other volumes, 4Mg Records is presenting this opus in a vinyl plus CD format, where the latter contains the whole tracks, while the LP has the excerpts for format reasons. Be sure to check this fundamental document of the Slovakian electro acoustic music. Take a listen here https://4mgrecords.bandcamp.com/album/na-i-hostia-experimental-studio-bratislava-series-3