Maciek Szymczuk: Light of the Dreams 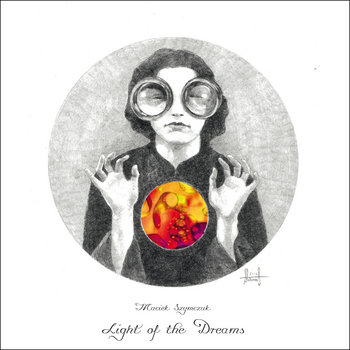 The first thought about this new Szymczuk’s release is the evidence of how this release seems mainly influenced by Kosmische Musik but, at a deeper analysis, it reveals a more complex net of influences; it's inspired by dreams and his musical development is driven by synth and also it features a cover that can be modified by the listener that can change the color and shape of the heart of the female figure in the cover which wear eyeglasses as it was a symbol rather than a portrait of someone.
The first track, "Chapter 1. Escape from Reality and Enter this World of Dreams", starts with a dreamy line of synth and it evolves in a second part based on rhythmic structure that is hypnotic while "Chapter 2. Dream of a Woman a Pig" is more varied so the synth are used to underline the development of the beat. "Chapter 3. Dream of a Wave and Rock" is more quiet and focused on the atmosphere while "Chapter 4. Dream of an Arab Omlette" is based on that sort of structure which is derived by Arab musical tradition and is as hypnotic as it's not repetitive. "Chapter 5. Dream of Five Sisters and Three Sheep" is based on the same structure but under the dub influence. "Chapter 6. Dream of the Mirror Stars" and "Chapter 7. Dream of a Small Watermelon" are atmospheric track based on the careful choice of synth timbres. "Chapter 8. Dream of a Black Dog Called Antichrist" closes this release with a measured use of echo which confirm the aim of creating a dreamy atmosphere.
The Pasonlini's quote 'Truth lies not only in a dream, but in many dreams” is expressed with the use of variations on the same which reveals a sense of form that put this release on a path of tradition and, so, it's a release that could be enjoyed by a wide range of listeners. A really nice work.