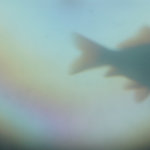 After some really good releases with How To Cure Our Soul, it's time for the first solo release of Marco Marzuoli. "Appunti" is a quiet short sonic watercolor focused on loop rather than drones but the hypnotic effect of his output remains intact.
The track revolves around a melancholic bass guitar loop tying together another bass guitar loop and a fistful of effects which create an aural spectrum similar to the cover image i.e., while everything seem static, something begin to evolve. The structure is able to escape the boredom that could arise in a so minimal framework with a sort of poetical afflatus created by the underlying drone slowly generated by the resonance which is fully audible in the background of the second part of this release.
This is a release whose radical writing could be not so well received by listeners accustomed by entertaining sound that reawakens the attention as soon as possible in a sort of thought's privation. Music for humble meditations.