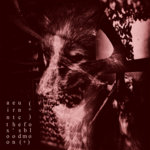 It's almost impossible to write a review about this release without talking about the personal issues involved. This release by Uncertain is a way of dealing with the loss of Ian Johnstone, mostly known as the late partner of Jhonn Balance, and is composed using sounds of deer and fox's and old tape loops. The result is a sort of mise en scene of reminders and sentiments which left no place for the austere notes of a requiem.
The initial words opening the tracks describes how a loved one is remembered for the precious moments lived and introduce a first part of the track based on samples and loops whose emotional impact is overwhelming as there's a juxtaposition of sounds whose phasing generates a sense of melancholy as the voices seems distant and almost inaudible as incomplete reminders or something too precious to be shown. The second part of this release simply add other loops to the main soundscapes underlining the sense of loss as distant drum shots sounds as something is falling until all loops begin to be eliminated from the aural field to end the piece in a quietness where the sound of the fox's can be heard and the final drum beat closes this release.
An almost canonical musical form is the perfect canvas for a painting of emotions which is heartbreaking. To be heard at least once in a lifetime.