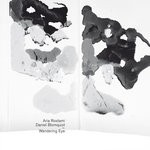 This new release from Glacial Movement is the result of the collaboration between Aria Rostami and Daniel Blomquist whose working process lasted over a year and a half. The various sound materials which were created using sources as samples, filed recordings, piano and synthesizer were sometimes played live and sometimes constructed sending files back and forth. The result is something between ambient and certain modern classical, as sometimes they try to develop proper melodies rather than rely on the impact of a predictable structure for crafted sounds, and takes song titles by a paper which highlights the best places to observe space with sharpness and clarity.
The first track, "Dome A 80.37° S 77.53° E 4083m", juxtaposes a gentle melodic synth line and crackles from, perhaps, field recordings so the result balances the quietness of the sound with the movement of the noises. The first part of "Dome C 75.06° S 123.23° E 3233m" relies on old recordings of piano to generate a sense of displacement on the first part while in the second part relies on rarefied drones. "Dome F 77.19° S 39.42° E 3810m" tries some distorted sounds, probably guitar sounds, prior to return to quiet and clear soundscapes. "Ridge B ~76° S ~94.75° E ~3750m" starts with subtle windy sounds upon sparse note and seems to develop in a noisy track until they decide to act with subtractions instead of additions. "Dome B 79.0° S 93.6° E 3809m" is a gentle ambient watercolor until a background noise emerges to end the track in a dissolving silence. The first part of "Ridge A 81.5° S 73.5° E 4053m" is based on detuned samples whose small noises generate a sense of distance interrupted by the emergence of field recordings.
Quite impressive in the aspect of sound craft, it's able to give the impression to recreate the place where it was composed. Pure cinema for the ears.