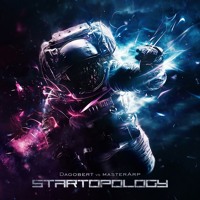 Twenty years have passed since Dominance Electricity started to burn the flame of electrofunk in Germany and after Jackal & Hyde's 12" they just released the newest Dagobert album. The last Dagobert Howe release was out five years ago and was a MLP titled "Astronauten" which he did collaborating with Kalson. The last proper album "Sonic Sound Of Bass", instead, have been released back in 2003 and was a double LP issued always by Dominance Electricity, as most of his stuff. The new album "Startopology" seems to be a collaboration with a new project MasterArp, just to discover that it's always him using a different name for his stuff more electro influenced, while Dagobert is more Electro-Breakbeat oriented. Anyway... The new album, available on 2LP (black or transparent blue), CD and digital formats contains thirteen new tracks (the digital release has a bonus nine minutes megamix of the album) which alternates or mix various influences: breakbeat, electro ("Booster" reminds me of Kavinsky), sci-fi soundtracks and also pop. The track which is somehow showing them all is "Mein Kosmos", because it has ambient background sounds, electro mid tempos and breakbeat vocals and, I don't know why, it made me recall "Freestyler" by Bomfunk MC's. If tracks like "Megatron 3000" or "The Restless Invader" are classic electrofunk songs, "Lost Transmission" or "Deep In Love" are really different, as the first one is a short sci-fi sounding intermezzo and the second is an electro pop song with hard beats and melodic vocals. Also "Dagonaut Theme" and "Across The Stars" are particular ones, because mix electro rhythms and spacey sounds. They sure have soundtrack approach which is kinda new for the genre. So, prepare yourself to different listenings to appreciate in full the new Dagobert sound.