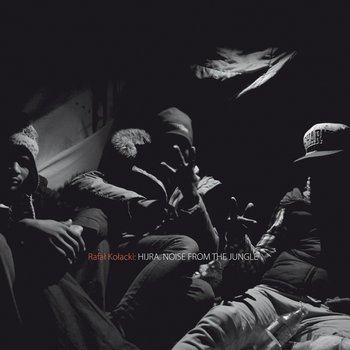 This release is based upon recording of music events and everyday life made in a temporary refugee camp called The Jungle in Calais, France. This field recordings document the result of the interactions of various nations in a relatively small area. Apart for the political relevance of a work around a theme, immigration, so present in public debate, is shows how music is present in everyday life; while music is almost a background in modern times, traditionally it was a part of specific moments of human interaction e.g., religious rites, and this recordings shows how this element remains present in african based ethnic groups.
But the sense of this release is not on the role of music but, as the liner notes printed on the cd clearly states, it's on the role of the document as a political act. As the refugees closed in the jungle, and called inhabitants by the author, are not citizen but are in a sort of limbo without a precise role, these recordings show them in a first place as humans and this is a political statement in a period when they are seen are a political problem. So, the role of the field recording is to capture the sound of their life without the indulgence of the sad representation of the trapped refugee but, in some recordings, as people which could even celebrate the fact that they are alive.
As the inner cover shows a plate where three hands are taking their food depicting how they can share the few they have, the recordings show how "they lost their homes and families but still retain what is the most precious: human dignity" as the author writes. Talking about music on this release would mean miss the point of this release: documents show what thought cannot. A remarkable release.