Rapoon: Song from the end of the world 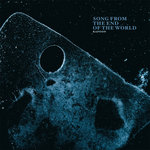 This new release from Robin Storey, known as Rapoon, is based upon an experiment to revive a mega-virus dormant for 30,000 years that French scientists discovered in the permafrost of the Russian Arctic. As this experiments awaken the fear that dangerous viruses could be dormant in Permafrosts and could be released as an effect of climate change, the starting point of this release sounds as an almost perfect subject inserted in the imaginary of Glacial Movements.
Under an atmospheric soundscape, the piano loop of "We travelled in waves" opens this release setting the sad mood of a voyage towards the unknown signed by the bell samples; the loop evolves in a second part developed around whistles and hums which are resolved by the return of the loop. "A listening ice" juxtaposes hums and drones to create a menacing soundscape. With "A sky beckons down" the album start to traverse dark ambient territories while "Call of tongues" is a vocal interlude to "A prophecy lies under" which juxtaposes drones and samples until a dulcimer recalls memories of the well known Storey's past; so "Call of deliverance" is an hypnotic track based on loops while "An answer in ice" is almost abstract with his construction based on noises. "Ancestors talk in lands of darkness" is a synth melody upon an evolving noise in the background. "The sky dances in green" starts as a field recording track of a snowfall that acts as a background to the returns of samples from the previous tracks modified to generate a track that gives the creeps for an adverse profecy.
The subject of this release is developed in such a way that let astonished as Robin Storey seems able to develop again a truly evocative musical output and sound again fresh after decades of releases which established a genre. Another great release from a real craftsman.