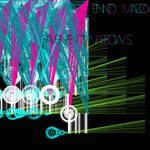 While his previous releases, 'Xuan' and "ceriseicicles", were acclaimed as wholly conceived, and complex, musical work, this new release is completely focused on fragmentation. Instead of one long track, "Pavement Narrows" is a collection of eleven rather short track made of short sound fragments are sequenced in a way to expose their dialectic in dynamics and tones; so barely audible moments follows high volume ones and noisy fragments follows melodic one. The basic form of all track is a quiet start and central crescendo evolving in a quiet end and this framework is able to include the enormous details generated by the treatment of samples.
"Hunting souvenirs" starts quietly with a drone that is suddenly juxtaposed by a noisy loop and, after a brief moment of rest, evolves with the juxtaposition of layers of sound creating a tick mass of sound. "Add ten to nine" is a brief interlude based on a loop. "Masu", the longest track of this album, is based on a rhythmic structure variated to create a center for the samples juxtaposed. "Splay" is an interlude for drone and noise to "Salmon run" which is divided in a drone oriented first part and in a noise oriented second part which find a resting place in "War of currents" with its low volume noises. The return, in a modified form, of one of the sample featured in the first track let "Tryst" sounds as the beginning of the second part of this release focused on the exploration of details rather than impact so it features movements in the aural fields rather than juxtaposition. "American grip" introduce "Marine at nighttime" which, after the initial fragments, evolves in an almost noise wall ending with the return to his beginning. "Hideout" adds layers of drone during his development and "Syrup trap" closes this release adding instead layers of sharp noises.
This is a truly demanding work for the listener and a challenge to the current listening habit: if heard with distraction or in a noisy environment, it's probable that every nuance could be rather missed, so, it's not designed as a commodity but as a true work of art. Essential.