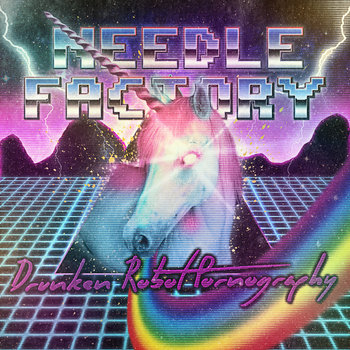 The signing of UK's Needle Factory by the Manchester-based AnalogueTrash Records label has surprised a bit, since this project has already returned with a new release signed to D-Trash Records earlier this year. Now working as a solo project by Freddy Morgendorffer, this project presents us a more developed sound environment compared to the last physical album 'Goetia', released nearly two years ago on Unrepresented Music. There's still the Post-Punk-like attitude by Morgendorffer available, but nowadays also noisy and brutal sounding elements out of Chiptune, 8-Bit-, and Techno-/Acid-styles get their slot into the bizarre sound environment of Needle Factory. This crazy and explosive sound-cocktail mixed and programmed by Freddy has uncountable surprises in its holster. There's a lot of fire under the roof here and Freddy likes to kidnap the listener into his very own, mad dimension. The cover art with a unicorn, a rainbow on a Tron-like background should be already a warning for you that this music rams down all boundaries and obstacles. It's energetic, it's driving, and it's diverse sounding, which is definitely not designed for the faint-hearted audience. 6 firing arrows out of Freddy's crazy studio-arsenal which I would like to see/hear presented live on stage one day. Kindly note that this 6-track EP is available as a limited to 50 exemplars cassette edition ' get it if you can! 'Drunken Robot Pornography' is a raw sonic assault far above a cheap straining for effect, which will leave you amazed.