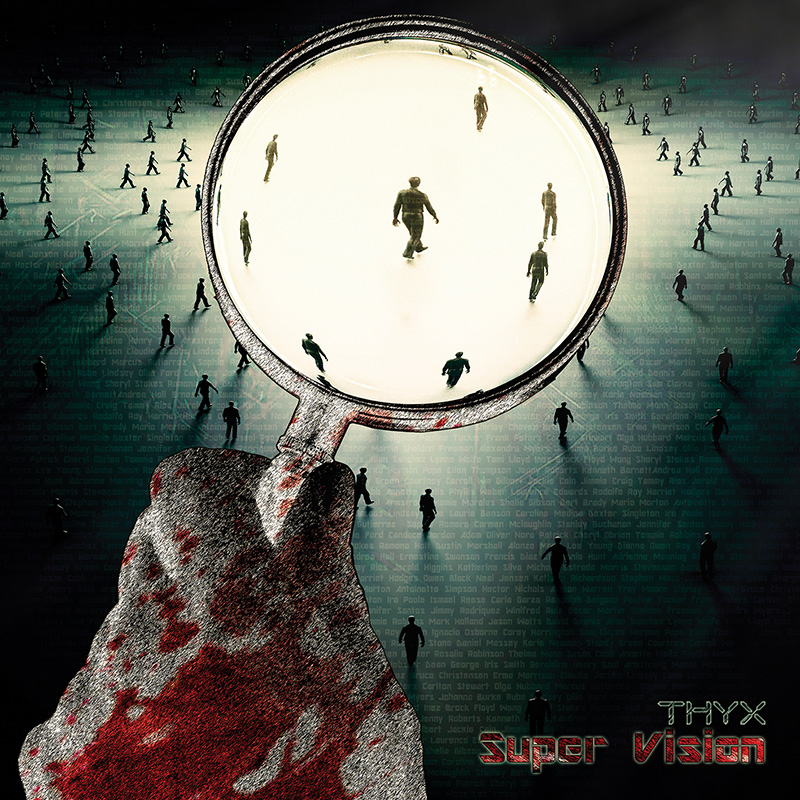 Since the Austrian Electro-/Industrial magicians of Mind.In.A.Box are quite bonded thematically to the ongoing story-board of the main protagonist Black and his adventures in the Dreamweb (story written by A. Gruber, www.agruber.com), it may has become a bit boring for the mastermind behind, Stefan Poiss So this MIAB side-project has come to life and has been named after a song written by Poiss about 15 years ago. This song and its name have a deeper meaning for Poiss, because this name stands for a synonym of a specific kind of soundscape he has once discovered. So now he hunts after this soundscape under THYX and tries hard to re-create what he once discovered. 'Super Vision' is already the third album on this hunt in a very short time-line. Of course, Poiss cannot at all wear off all of the sound ingredients which have made MIAB that famous and highly recognized. Also under THYX he produces his well-known formula with a futuristic sound-design, with bombastic synthesizer layers and also the often with MIAB discovered vocoderized vocals. So THYX is more than a valuable copy to MIAB and you can be assured to get another high-quality release out of the Austrian sound-stable. Musically Poiss services a wide playing-field and entertains with genre-bending changes. 'Robots Don't Lie' is a decent sci-fi storyboard with wobbling synthesizer-leads and a straight beat-work. Another great tune to satisfy the dancefloor-junkies in the dark clubs can be discovered with 'Forgotten', while the charming pop harmonies of 'Our Only Home' have to be mentioned too in the highlight-listing of this overall marvellous album. 'FÃ¼r Immer' combines different vocal performances into a darker than usual sound design. This list of highlights can be continued endlessly while it only proofs that Strfan Poiss still enjoys his being in creating unique soundscapes for the after-world. If you've been impressed with MIAB before you will also love THYX. 'Super Vision' is a top-notch Electronica album and another lecture for all the poor wannabes out there providing keyboard-music with factory preset-sounds.