XMH: In Your Face 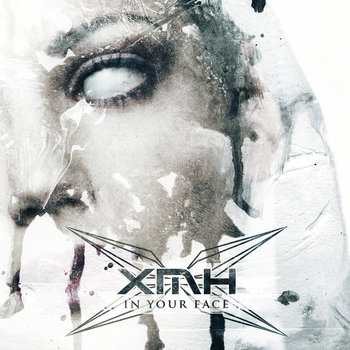 This Netherlands-based trio has been well in my memories with their last album "State Of Mind", released by Danse Macabre and later licensed to Nilaihah Records for North-American availability. Now newly signed to the Belgian Alfa Matrix label they present us a new 12-track long album full of their expected Harsh EBM/Hellectro sound outfit. "The Business" released earlier as a teaser track for this album already could enter quite good reactions from the audience and moreover from the club-junkies. This track also opens this album with its straight and sweat-driving Techno-like beat-work, the screaming synthesizer-leads and the usual cookie-monster-like growling of the vocalist. It's Hellectro, Baby, what else do you expect? Also some of the further tracks like "Product", 'Forever' (with lead vocalist performance by the female member Isa Garcia), or the title track don't allow any dancefloor-victims to get out alive, because this action-driven album doesn't take prisoners. And with "Stiere und Schwule" this album holds up an ideal club-hit right up to follow the success and prominence of "Komasaufen" available on the predecessor. "Stiere und Schwule" is a prominent voice-sample taken out of the German synchronization of the overused "Full Metal Jacket" movie, in the scene where the drill instructor asks Private Cowboy about his roots (Texas). Not very original to use those prominent samples you might say - yes, but with its straight beat- and rhythm-work this one is quite effective and will let the masses stomp!
Funny I found the sentence in their information sheet, that they "slightly leaving the agro tech path and moving to new directions." They actually do so? Well, they rather leave their harsh style in micrometer-like dimensions and are still and undoubting members of the Hellectro-camp. Good and quality-producing members, yes, but actually with a very small, nearly unrecognizable will to change their throughout successfully formula. Here comes the point where I find the hair in the soup: "In Your Face" is to me a bit too repetitive and a bit too obviously drilled to follow the success of "State Of Mind" in its kind, production and out-coming. The musically development of this "Oranje-team" and their course to reach new directions is still active and hopefully not ending herewith.