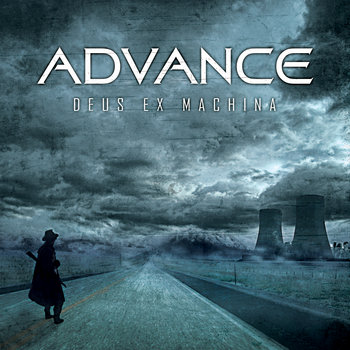 We welcome the new UK-based label AnalogueTrash in the worldwide playground of Electro/Industrial music and they like to introduce us their work with their first release, the debut of Tom Perrett a.k.a. Advance. This Scottish project can look back on some high-prolific gigs and has opened for prominent projects like Assemblage, Surgyn, Modulate, or Icon Of Coil. When it comes to describe Advance's music, it seems that Code 64 and/or Tom Shear's renowned A 23 project has left a huge impact on Mr. Perrett. Advance are without doubts counting to the Synth-/Futurepop-genre with the typical programming abilities, the lighter synth- and percussion-work, catchy melodies for the choruses and a capable, crystal-clear vocal performance. Indeed, Tom's well-sounding timbre is generally based in higher than usual slot, a bit comparable to Bjorn Marius Borg (Code 64). Lyrically you'll get a harder cake to bite: themes of a post-apocalyptic, not-so-distant future are the things which seem to surround Tom's compositions ' it needs to be admitted, that the music outfit based in a relative smooth Synth-/Futurepop style may doesn't fit to transport the engaged message here and there ' while this lays in the eye of the beholder. But asides of this his music deserves praise, because it delivers a flawless, near-to-perfection sounding synth- and rhythm work which will surely satisfy all friends and supporters of this music genre. Even if I find some of integrated Techno-/House-fanfares in tracks like 'Dead Technology', 'New Objective' and mostly in the unnecessary Tekkno-like instrumental 'Divine Machine' too repetitive and sinewy, there's actually not too much to complain. Some of his tracks surprise with abruptly installed breaks to slow down the complete sound environment, until the tracks restart but mostly in a faster speed than before ('Fractured Existence', 'Enter The Wasteland'). Well done produced Futurepop-music for a debut, it only needs a bit more personality installed into the music. It surely cannot be said, that Tom invents anything new. We had this kind of music often before, but if he can manage here and there to find a key to a musically more authentic outfit based on his brilliant timbre, the future seems to be bright for this project.