Movement Ten: Build Them And They Will Come 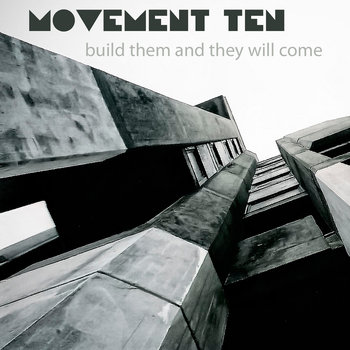 Second full-length album for this British Alternative/Electronica-duo released only 10 months after their promising self-titled debut. Movement Ten surely like to keep alive in the eyes and ears of their fans instead to restart from scratch again. But although both of these releases have been out in between a short time period, there are significant differences between them. This new album starts with an energizing track entitled 'Get Down' in which the minimal arranged bass-line and rhythm section receives some Brit-Pop-like support through some roaring guitar riffs. A good kick-off. 'Black And White Living' then switches to a complete Electronica-based sound-design. It could be a well-done Synthpop tune, but somehow it misses musically a bit the target. Mostly because the synth-arrangements are too minimal produced and could need a bit more inspiration. Next is 'Halo' and the band has already announced this one to be a possible candidate for a single release. 'Halo' has a straight and danceable structure and reminds with its strong early 80ies affiliation on some British Post-Punk and New Wave-pioneers like Joy Division or Wire. But asides of this I tend to say, that 'Ghost Road' could be a better alternative, since it turns out to be the softer, but easier recognizable tune. If the monotonous drum-patterns could bring in a bit more brilliance, this track would be ideally working for airplay. Another favorite is 'Behind Me' with its hypnotic synthesizer-play and some oriental-sounding insertions - maybe one of the tracks which offers the most maturity of this productive duo. 'Never' then returns to the straighter side of this duo and adds quality guitar riffs to the monotonous bass-lines. It has some similarities on the starter 'Get Down', although the starter sounds more refreshing. With a try to test some Techno/Trance playgrounds through some 303-like bass-line sequences and typical TR808/909 rhythm patterns Movement Ten return on the all-Electronica sound-outfit - sorry, but this one sounds helpless and a bit too much off-topic for them. Since the last two tracks do not add any more valuable content to report of, this album leaves me a bit unsatisfied. 'Build Them And They Will Come' sounds surely darker oriented than expected, but it actually misses a bit of the pioneering impact of the debut. The vocals are still sounding well in the mix and deliver all needed emotion, but musically the tracks of this new album are too one-dimensional and leave too seldom already discovered paths. It even strengthens this globally unpleasant impression thanks to the fact that the ultimate 'smash hit', which could have been easily discovered on the debut ('Gravity' / 'FTBIA') is a miss here. Where has their ease and cheerfulness gone? Movement Ten can deliver better.