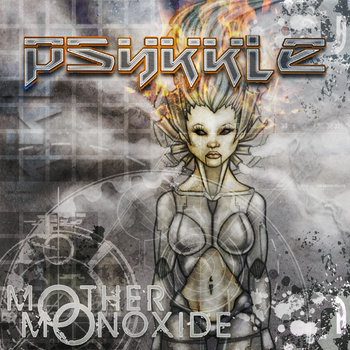 Another review I should have written months before, but also another release which picked me by the nuts! Psykkle, so far for me a relative unknown force in the world-wide scene, although they already released a first album entitled 'Rock Bottom Paradise', consists of Evan Collingwood (sounds, machines, production) and his prominent main vocalist Gerry Hawkins of Cryogenic Echelon. 'Mother Monoxide' is their second album and represents a full-scale 16-track Dark Electro-release which offers some surprising style variations thrown into the mix. The globally Dark-Electro sound-outfit receives successfully support by Dub-Step, Trip-Hop and IDM styles mostly concentrated to take impact on the rhythm section. It is the overall very Cyberpunk- and Sci-Fi related attitude making this album a special gem. If you look out for an album with non-stop violent dancefloor-compatible Harsh EBM assaults, then you'll go wrong with this one. The few tunes totally suitable for the floors of darkest clubs around can be counted with one hand (examples: 'Nanonet', 'Breathing In'). Also their already discovered track 'City of Nodes', which has been revamped previously by several foreign remix contributors (Revenant Cult for instance'¦), rather follows the globally tone of this album. 'Mother Monoxide' lives and celebrates its cinematic outfit as it would be a matter of course. Also Gerry's well inserted harsh and nightmarish-sounding vocal performance, which has been mostly manipulated by multiple vocoder-effects, offers a perfect symbiosis to the layered and richly textured Dark Electro sound-design. Good stuff, not to underestimate!