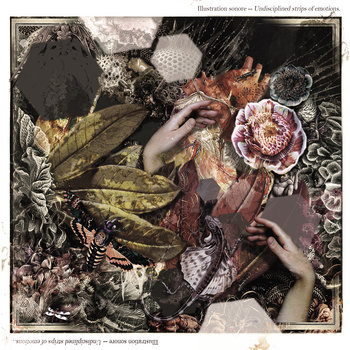 After twenty-six releases of reissues from the past, Medical Records is releasing its first release played by a nowadays band and at this purpose they picked up the Paris based duo Illustration Sonore. Formed by Dash (active also with Dolina) and Christina (from Froe Char), the duo released this year two songs ('Flying Lights' and 'Violence') on the La Forme Lente compilation 'Circuit d'Actes 3' and had only a demo out. On their debut album titled 'Undisciplined Strips Of Emotions', we can find ten tracks of which five really new as 'Flying Lights' was on the compilation and 'Buried In The Hearts', 'Divinatorium', 'Vision & Prayer' plus 'Die Gefhuleduselei' were on their first self titled demo. Anyway'¦ The album opens with 'Ulysses', a really good song which sets the atmosphere for the whole set: dark ambience, catchy melodies, deep analog sounds and punching electronic drums. Mixing male and female vocals, Illustration Sonore succeed into giving their personal touch to 80s electronic wave blending it with electro industrial influences (see Cabaret Voltaire or Chris And Cosey). See tracks like 'Cannibals' or 'Blacklights' (distortion, melody arpeggios and cold vocals are their core elements) and you'll understand what I mean. There also tracks which are less aggressive like 'Divinatorium' (to my surprise a song with Italian lyrics!) and good for an alternative dance floor. This is a nice debut and you can check it at this page http://medicalrecords.bandcamp.com/album/undisciplined-strips-of-emotions-mr-027