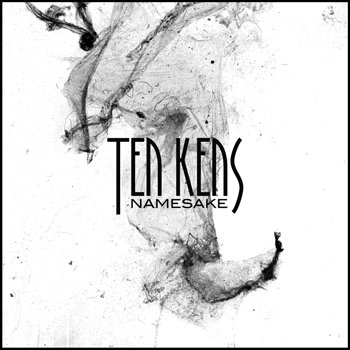 Coming from Toronto, Canada, Ten Kens self release their third full length titled "Namesake". Already released as digital download the last year, the album finally has an extended physical release edition with four bonus tracks coming from the same recording sessions. Now containing fourteen tracks, "Namesake" is a powerful dark psychedelic noise rock voyage recorded, produced and engineered by Ten Kens' own Brett Paulin and Dan Workman. Born from a period of isolation, the album sounds obscure and inspired. Check the way the songs evolve turning from dark folk ballads to psychedelic noise monsters where out of control distorted guitars bleed their chords on heavy drumming and distant chants. Sounding like a pagan ritual, tracks like "Bliss"or the hypnotic obsessive "Gently Used" will sure catch you like a spider's web catch a fly. Having shared stages with such bands as A Place To Bury Strangers, No Age, Deerhoof, The Joy Formidable and Surfer Blood, Ten Kens are ready to start their to widen their US and European tours. If you love bands like Codeine or late Slint be sure to check them!