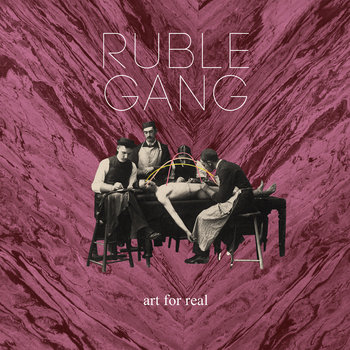 Ruble Gang is a band coming from Moscow, Russia and their only available track, before the release of this digital single for Romance Moderne, was "Building Communism" on the double tape compilation "Forward Rewind: The Future Echo Tapes" released the last year by Aufnahme Wiedergabe. That compilation was gathering some of the best subterranean electronic new wave bands, with names of the likes of Martial Canterel, Makina Girgir, Lebanon Hanover, Human Puppets, Linea Aspera, etc. Influenced by synthetic wave of the late 70's and early 80's, Ruble Gang on the single "Art For Real" present two tracks: the main title and "Silver Plane". The main tune is a 4/4 mid tempo with catchy synth lines and Russian lyrics. "Silver Plane" has a similar bass line melody but it's more influenced by post punk and vocals are more nervous. Both the songs make the flag of analog synthesis proudly flying high and can also be used on alternative dancefloors. You can check and purchase them here http://romancemoderne.bandcamp.com/album/ruble-gang-art-for-real