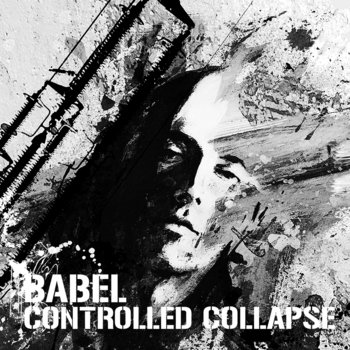 I promised to start this review as follows: once more a review I should have written months before (cheers kr-lik!). Poland's most prominent Electro/Industrial project Controlled Collapse returns with this all new studio album and likes to invite us to their vision of 'Babel'. It's a musically journey through cleverly arranged EBM/Electro tunes, which are luckily far away from the early beginnings of this Polish talent. Once started as Poland's answer on Suicide Commando, it was in the early years (2003 - 2007) Johan van Roy himself taking care of this project and signed it for his NTP label under the Dependent wing. Controlled Collapse got established in 2003 by the young Electro-musician Wojciech Krol (a.k.a. kr-lik) as a solo-project, but nowadays he receives support from his brother Piotr as well as the two live-musicians Tomasz Krawiec (keys) and Paulina Lewek (drums). Somehow it is a pity for kr-lik to get reduced on the Harsh EBM/Hellectro formula, because he has already proven with the self-released follow-up album 'Things Come To Pass' in 2010, that he is able to develop regarding arrangements and compositions. Same counts for this new album, 'Babel' has several nice examples to offer. The opener 'Pain' with its edgy guitar riff inserts, the vocoderized vocals of kr-lik, and a typically US-Industrial related kick-and-snare-work marks a decent shaking-up tune for all those expecting the usual harsh introduction. The mid-tempo, very old-school-EBM-like track 'Numb' convinces with a deep-synthesizer badass-bass line (ha-ha), which reminds me on some earlier Croc Shop tunes ('Beneath'/ 'Metalwerks'-era). 'Change The World' counts rather to the more melodic pieces on here, while the speedy 'Dzien Sadu' with some biting guitar drops represents the only one tune with lyrics in kr-lik's mother language Polish. 'Fragment of Time' features a dual vocal performance Aleksandra Burska and it represents again the more catchy side of Controlled Collapse. Another favorite is 'Cube' with its tricky percussion elements asides the normal kick-and-snare-work. Also the cold, Dark Electro-like track 'Alone' with its sinister synthesizer pads as well as kr-lik's impressive vocoder fx-manipulations on his vocals should leave the listener impressed. Finally there's to mention 'My Fault' as being the one and only tune acting a bit like a blast of the past with some distortion fx-elements on the vocals, rhythms and a generally harsher EBM outfit. All in all is this new album not the soundtrack to discover new shores for the Electro/Industrial genre. It also won't win any imaginary 'produce-the-hardest-album-around' contest. But it generally services all needs and expectations you would have on a solid, crafty and still modern sounding produced EBM album. A bit more than this, because kr-lik provides diversity and shows different possible directions in which he and his fine project could develop. 'Babel' isn't definitely the end of the rope, so keep it on!