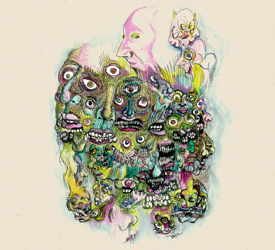 Until the day I heard this record, I considered myself quite far out in the musical world. But that was then - Now I know I have a long way to go, if I want to see just the horizon of where musical projects can bring you. On this record, Philip Gayle has put together compositions in the same overdubbing way as on his guitar based records, slicing up sounds and merging them together to form interesting combinations of new structures and textures. But one thing differs a lot from his past records: The guitars and string instruments are replaced by body sounds, gibberish speech, burps, snoring, sneezing and sounds on the fringe of what you can recall as vocals. All from his own body.

Gayle has recorded body sounds for eight years, from 2000 till 2008, and put them together in both interesting and challenging ways, leaving most of the material in it's original form without processing, or any doubt about how the sounds are made or where they come from. Because the concrete sounds are so familiar to us as listeners, this record is a bit more challenging than other pieces of concrete music. It makes it harder to listen to the songs in a pure musical way, since your'e always reminded of the origin of the sound. That challenge is also why I like this record, it's a perfect test in so called acousmatic listening: Trying to listen to the acoustic parameters of the sound itself, and reject the associations we get to the source. I think John Cage and Pierre Schaeffer would appreciate this record, as it both challenge and extend their thoughts on what can be considered as musical elements or not.
I'm not sure if Gayle think of this record as an attempt to widen the conception of what we can call musical sounds or not, but I needed to concentrate to hear the sounds itself, and not the sources. (A good example of that is the song merkin identity crisis, where the question appears: Is he jogging now, or is that the sound of an intercourse?).

When it comes to the musical content, the record has a wide range of compositions and sound material, from deep growling drones and static darth vader breathing to chaotic, high pitched ''donald duck'' performances and heavily panned gibberish cacophonies. You don't feel anything is repeated unnecessary, or just placed there without a reason, it's just the content itself that makes everything, eh.. something else.

This record is by far the weirdest record I've ever heard, and I'm glad to see that musical boundaries still can be moved, challenged and even broken, in a postmodern time we tend to think that nothing can surprise us anymore. This is pure madness, in it's most creative and inventive way. But I should still warn you - it is far, far out.