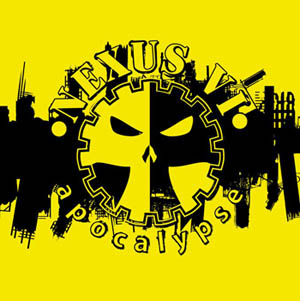 NEXUS VI are one of those newly discovered, refreshing Electro/Industrial projects out of the Russian underground scene, who decided to agree a contract for their official debut release with the Hungarian-based label Advoxya Records. Previously discovered here and there via MySpace and placed on some compilations, this project seemingly consists of two men / two women, who prefer to hide themselves behind those notorious pseudonyms like Neuromancer, Cyanic, Nike, and Neurobitch. However, this all hasn't anything to do with their music, which is a diverse mixture, which balances a bit between classic Goth-Rock featuring angelic female vocals, and a rather raw sounding Electro/Industrial-related outfit. It doesn't wonder too much, if a Russian colleague-project like PURPLE FOG SIDE can be named for comparable skills ' it fits perfectly that PFS also appear on this album with a remix contribution on the track 'Agony'. Also worth to mention are those tunes, which combine the best all elements out their musically dimension, 'Made Of Fear' and 'Forgotten Hero' are worth to mention. 'Apocalypse' has its moments and can entertain with a few tunes here ' although this Russian quartet isn't (yet) able to offer a high-end quality album, which takes an international-based audience by storm. Still a lot of work and space for development ' but nevertheless a quite fair debut.