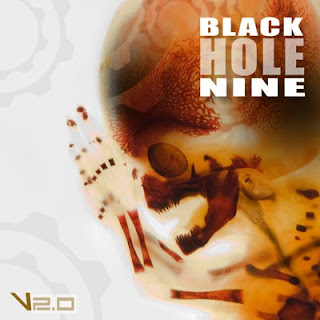 Congratulations, the relatively small Spanish label Mutant-E, here in form of their newly established side-label Mutant-Tek, could arrange the deal with this Venezuelan Harsh-EBM talent, which has left impression by an international audience with their freely available last album 'Velocidad de Escape'. In between, and only a few months ago, this band has additionally released a 4-track-EP 'Rebirth & Remixed V. 1', with which the band has picked out 4 tracks of 'Velocidad...' to re-vamp them a bit with a more dancefloor-oriented sound design. To set all of this a crown on the head of the responsible musicians, this simply entitled new album 'V. 2.0' puts an end to the previous recognized phase of this band. Unfortunately this band currently suffers a bit of some problematic conditions, because it seems, that Siva Black, the leading protagonist behind this project, had to move and has left Columbia to settle down in Mexico. Not a problem normally, but it seems, that the band formation itself consists out of thin ice, because the new audio part 'V. 2.0' got completely produced and recorded by Siva Black alone. That is really a pity and alters the quite good impression, which the predecessor has left, because it has been some of the good inserts of the second official band member Kaiper, who could integrate vocals and some Black-Metal-like guitar assaults, which have been synonyms for a relative unique outfit of this band. The new tracks, especially those stomping tunes like 'Shoot It In The Head', or 'Cheap Shepherd', are convincing in its typical Hellectro-/Harsh EBM-environment, but they lack of this tiny influence, which Kaiper normally would add. And vocals, no matter, how much distorted and fx-processed like a cookie monster they may sound, are still the most important instrument in a mix, 'V. 2.0' completely avoids this essential element. Too bad, because to offer only instrumental versions leaves an unready impression of this album, so let's hope, that they can decide to collaborate as a complete unit again. This DCD set compiles all three releases of this band to an important collectable-item, also and because if you don't like to hunt for their free downloads available at their web resources.