since 1994, your no.1 source for electronic, industrial, ambient, dark, experimental & new music...
«« Previous Review (Bang on a Can marathon) ⟺ Next Review (Saints of Ruin) »» 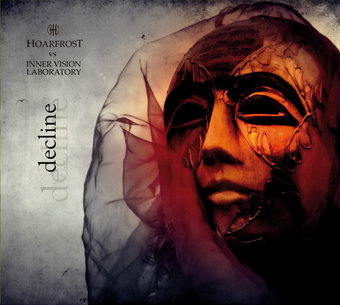 The collaboration between the two industrial/dark ambient polish projects is a mesmerizing production of sorrow. The album is inspired by two poems: 'Madman' and 'Modern Icarus', aiming to tale the descending into the pits of madness of a man. However the result is not so strongly conceptual and linear and, honestly, sounds more like the descending into despair and the self-consciousness of it; but the technical level of the production is amazing and the album sounds good.
The album starts with "mind infinite" and his bass drone and some noise coloring the darkness. "Do you see them too" begins to show the structure of the work: there's a dark ambient drone and some field recordings inserts that create the atmosphere. The result could well stay in a movie due to the cinematic effect. "last waltz" is a love song for dead people with his romantic line of piano. Then the voices: "It's a suicide ... a complicated situation" in the track "boundless oblivion", this track is the peak of the album: bells samples, noise, field recordings tell the story of someone trying to understands what happens in someone else mind. "A clear fuse" close the album with some sort of irony with the carillon like line of piano.
The album sounds well and show that it's conceived as a concept, this is not a innovative release, the composition is full of all the typical trademarks of the genre, but is a record of substance and really well produced.