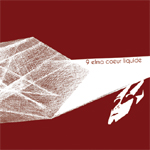 First appeared on a release in 1995 on the "Elektrauma 2" compilation, 9 Elma fifteen years after present their debut album COEUR LIQUIDE. Composed by Grazia Dell'Oglio and Stephane Tremel (sound designers), with the "machines" control of Laurent Le Fers (boss of the M-Tronic label) plus the live help of Cecile Fayolie, who is in charge of the live arts, COEUR LIQUIDE is a multi faceted album which contains elements of techno, industrial and a bit of retro electro (check the final part of "The call of Elara"). "Uranium 238" is the perfect track to check first because gathers them all: it starts with a robotic voice, electronic industrial beats and a techno acid pulsating bass line just to follow with a male/female duet followed by an electro techno beating tune. Analog drums and electronic beats continue to lead the track while synth arpeggios come and go. The following "Square dance" is an upbeat instrumental tune that has acid techno, ambient and industrial elements. The style changes again with "Sphere" thanks to distant electronic percussive noises which function as a background to a melancholic piano/synth pad melody. Sidereal atmospheres, techno/electro and industrial percussive sounds make of this album a release you shall not miss. The album is also enriched by four good mixes performed by Lyynk ("View from the sky" is the track they chose and they made it turn into a dark Middle Eastern slow industrial e.b.m. tune), Displacer ("Shaman" is the song they picked up and now it sounds like cinematic breakbeat tune), Architect ("Square dance" has been turned into a slow industrial two step tune) and Millimetric (now "Uranium" sounds like retro techno tune).