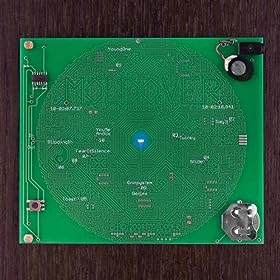 There are VERY FEW people pushing the envelope today. Moldover is undoubtedly one of them, big time! He doesn't just do it musically, but he even builds his own instruments and delivers his music in probably the most original artwork/CD cover I have ever seen.
A few years back this guy pretty much single-handedly launched a new underground phenomenon known as "controllerism" (the art of manipulating sounds and creating or remashing music live using computer controllers and software) which then turned into a whole scene of people doing similar things. He then went on to build the Octamasher (an interactive music installation made up of eight unique keyboard controllers connected to one computer that allows anyone to get in on the fun and jam with any 7 other people). His first album (reviewed on these pages) was a masterpiece of live-remashing of famous rock, pop, electronic tunes, but Moldover wanted to move beyond that and create something that was all original and so this album slowly started to take shape. He's been working on it for years and it sounds fantastic!
Musically you can hear that he has a rock background and in this record he takes his previously instrumental-only/digital-only electronic music to the next level and adds live drums, live guitars and even does some signing. It's hard to say what's in his iPod... There's a broad range of influences at work here, probably things like Squarepusher, Tool, Linkin Park, Aphex Twin/AFX, Frank Zappa, Clay People, Venetian Snares, Boards of Canada etc... Moldover's music is as fresh, eclectic and original as it gets, with influences ranging from funk to nu jazz, from prog rock to metal, from glitch electronica to ambient, from drum'n'bass to dance, from darker dronier stuff to bright solar things. Generally it's safe to say that it is a very uptempo CD and except for the last tune of the record (sort of a Michael Manring guitar-only manipulation) and one other tune, it's a very hype and hip fast-paced piece of work. You just will have to hear it and you'll know how cool it is.
The entire record is made using Ableton + Reaktor and a self-built midi controller made of a bunch of ribbon controllers, knobs, faders, switches and arcade video game type buttons which you can see him play if you are lucky enough to catch one of his very cool live sets (you should!).
You can download all of the tracks from a bunch of different places online or buy a cheap $10 CD from his website, but if you want something unique you've got to get yourself the "awesome edition" (remember when I mentioned the most original CD artwork of all times?). If you thought that the David Lynch/Sparklehorse/Danger Mouse was original, Moldover tops that by housing a real circuit board inside a regular jewel case. The PCB traces create a maze artwork around the word Moldover and on the back they actually outline the titles of the songs. As if this were not cool enough to just look at, Moldover made this circuit board into an actual working instrument that he calls a "light theremin", made up of two light sensors, a trigger button, a blue LED light a speaker AND a headphone jack! So not only can you impress people by literally "playing" the art work of this CD, but you can even plug it in and rock out with it for real like Moldover does at some of his shows! I don't usually post links to youtube videos but this time is different: you've got to do yourself a favor and check this out for yourself so you know what I am talking about: http://www.youtube.com/watch?v=T8UzSVFUIc0&feature=player_embedded
Friggin' awesome! Obviously the dude is from another planet.