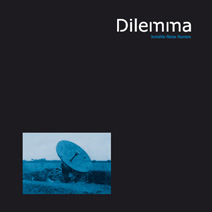 DILEMMA were a German duo formed by Klaus Hahn (active previously with The Chemical Death and Cat No Res) and Christoph Schaller that was active during the 1986 ÷ 1990 period. They released seven tapes and participated to a couple of vinyl compilations: Christmas EP" (7" on Dirk Ivens’ Body Records) as well as on "VA – Forms of Elektronik Body Music" (LP on Impuls Records). They supported Klinik during the 1989 tour but never succeeded to have a proper album released. Anna Logue Records decided it was time to let them know to a wider audience and released this compilation album / live 7". The 12" contains a selection of twelve tracks coming from their tapes and since from the opening "Shocked in the glasshouse" you realize that they have been hardly influenced by the early e.b.m. of bands such as D.A.F., Klinik, Nitzer Ebb and the ones of the early KK roster. Their sound was mainly based on drums, basic synth sounds/noises and shouted/filtered vocals. Even if some tracks sound a little naive without a doubt the duo did their best to sound honest and they succeeded into creating a cold/mechanical atmosphere that will please lovers of mid 80's industrial synth sounds. The 7" contains live recordings of "Device like a claw", "We can kill desire" and "Will to power" and on these three you can feel the band's spirit and appreciate in full their sound as the controlled aggressivity of studio tracks is abandoned and vocals sound more raw and convincing.