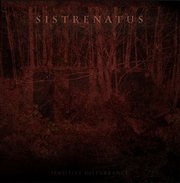 SENSITIVE DISTURBANCE is the third album of the Canadian combo called Sistrenatus and it sounds damn good. The seven tracks of the album tear down the barriers of industrial/noise/dark ambient music by mixing elements of each one of them with the only aim to create a tense soundtrack. For example, "Frequency Contamination" with its mix of synth waves, analog noises and metallic percussions is able to catch your attention immediately thanks also to its constant grew that brings in sudden power noise blasts here and there. "Rusted Earth" sounds like old good 80s industrial music but with improved sounds and at the end it turns into a death march thanks to distorted guitars and percussions just to fade into "Echoes From The Past" which expands this theme some more with the add of recitative vocals. "Lost Transmission" is another track where concrete noises are mixed with industrial sounds and dark ambient patterns but on "Forgotten" we reach the peak thanks to a perfect mix of melody, tension and crisp sounds. On this one, but generally on all the tracks of the album, Sistrenatus show their ability of balancing all the sounds creating a mix where everything is in the right place and for this reason their music sounds so effective.