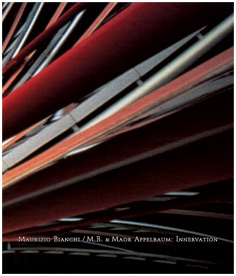 What we got here is a couple of well-known names and sure if MB is a sort of living monument for what regards industrial music, ambient and related, Maor Applebaum in my book is one of those musicians you can always expect to produce nothing but great music. Am I really too enthusiastic? You still don't believe my words? I'm sorry I've discovered it too late but if you've never heard Applebaum's collaboration with Hallowing that came out on Tophet Prophet I think you should really give it a try, the title is "collaborating torture" and both the music plus the history of the whole collaboration can give evidence no title could have sounded better. By the way, going back to this cdr the first thing to be kept in mind is the fact this should be filed under the experimental discography of both artists which means no industrial sounds, no dark ambient feel and so on. The most of the sounds selection is based on high-mid frequencies but still not Pan Sonic/Tony Conrad alike, consider they've utilized a great variety of white noise and unexpressive frequencies. If you ask me, I'd guess the majority of dirty noises plus analog-sounding frequencies comes from Bianchi, while the most of the high pitched tones plus the whole sound definition comes from the hands of Applebaum, but maybe I'm completely wrong thus take it with a grain of salt. Ok groupies and fans reading, don't worry! If my ear is still decent some of the tracks show the background of both the artists involved in this collaborative effort thus while dueling on the experimental front this work betrays the fact they can do it hard as fuck. By some means it appears to be quite inexpressive but with crescendos and spiral downwards enriched with a clear-cut song construction (for example "afferent" and "CNS"). The title comes from the human body and specifically from the distribution of nerves, so on the cover you see tubes and mains of a factory/architectural structure, it reminds of the period close to Pascal when the whole human philosophy was pondering on the animal/human body perception put in parallel with the idea of a machine... time pass us by but the central questions/images are still the same: "part animal part machine"... .I know some of you still remember the quote.