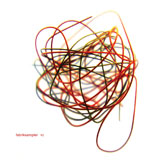 On the web site of the label there is only this description: "New compilation album which features exclusive new tracks from Henrik Nordvargr Björkk (Sweden), Lull (UK), WoO (Serbia), Go Tsushima (Japan), Left Eye Dominant (Italy), Alexei Borisov (Russia), Tania Stene (Norway), Pure H (Slovenia), Sunao Inami (Japan), Dodecahedragraph (Slovenia), The Cherry Blues Project (Argentina) and Final (UK). Full album of ambient, drones, noise..." But there is far more in this jewel, there is the work of the pioneers of the ISOLATIONISM kind of music that all the world heard in the Sci Fi masterpiece "Planet of the Apes". This album is amazing, astounding and literally perfect, only its sounds are able to define the power of it to suggest the huge and immense abyss of the collective subconscious linked to music. Drone Music and ambient have this "secret" power, to be the mantra of the modern era, where the quiet noise of the computer and the hum of the neon lamp are the new composers. The artists involved in the album are perfectly tuned and their work are a continuous surprise for the ears. It's easy to focus our attention on noise guitarism mixed with ambient and glitch, ambient recording and pure experimentation, there is nothing of usual and in the same time it's not an aggressive work, that's nothing to do with noise music or harsh noise. Every tracks is a probe in a different universe, the artists selected rule very different worlds, anyway my favorite track is the 7th a distant drone, similar to a stormy sea of fluorescent lights where a strange entity is calling out; it was recorded in a catacomb. This album is a must to have and Pharmafabrik defined the secret island where these strange sounds born and are transmitted.