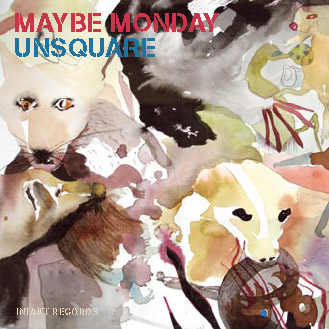 In November of 2006 Larry Ochs' Maybe Monday improv group had a 3-night residency at Zorn's club The Stone in NYC and one of those three afternoons they all gathered in my recording studio to create "Unsquare". Larry Ochs on sopranino and tenor saxophones, Fred Frith on electric guitar and Miya Masaoka on 25 string koto and electronics joined for the occasion by special guests Gerry Hemingway on drums and percussions, Carla Kihlstedt on electric and acoustic violins, Ikue Mori on electronics and Zeena Parkins on electric harp and electronics. They all recorded live, together, over one hour of music, pretty much straight through, all first takes, no overdubs and more than a year later Swiss label Intakt released it for everyone's enjoyment. If you are familiar with the sounds of NYC's downtown music scene and the musical world revolving around Zorn, you should have an idea of what this might sound like. The interesting aspect of this record is the interaction between the three core members. Miya's oriental strings plucked lightly while Fred's guitar is making all kind of sounds, way beyond just plucked strings, and Larry's saxophones whaling in the background (or foreground). I think that the fact the three of them have been playing together for a while does indeed transpire in this recording, but the addition of the personalities and the sonic palettes of the special guests has taken this experience to a new level made of subtle complexities and new sounds, usually not part of Maybe Monday's sonic offering, which makes it all the more unique and worthy of a listen.